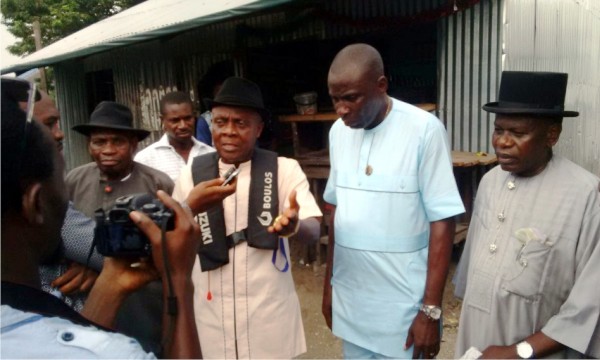 A Manager of one of the emerging modern markets in Port Harcourt, once told newsmen in his office that the commonest thing about markets in this part of the world is their level of untidiness.
That assertion to some extent is true against the backdrop that the prevailing poor sanitary condition in some markets in Rivers State, especially those in Port Harcourt City is unbearable.
It would be recalled that, the Rivers State Waste Management Agency (RIWAMA) had in several press statements, condemned the level of indiscriminate refuse disposal in markets within Port Harcourt and its environs.
Similarly, the Rivers State Ministry of Environment, apart from the issuance of threats against this menace has gone as far as arresting some traders who have formed the habit of littering markets with all forms of refuse.
At Creek road market, in the Port Harcourt Township, traders are yet to come to terms with the policy of the present Administration which is to ensure clean markets throughout the state.
A refuse heap at the centre of the market by St. Jude’s Church along the road was the main attraction for visitors as it oozes out offensive odour.
It is also observed that, the area was where most food stuffs were being sold to customers for consumption.
The situation, therefore portends a grave health hazard for both the traders and visitors to the market.
Opinions were, however, divergent among the traders on the issue, with some of them blaming the situation on the attitude of some traders who refuse to keep their surroundings clean.
They also told The Tide that most traders in the market had formed the habit of always staying away during the weekly and monthly  environmental sanitation exercises.
They stressed the need for the Port Harcourt City Council to be proactive in enforcing compliance to both the weekly and monthly environmental sanitation exercises in the market.
A trader, Mrs Joyce Ada, however, said “traders must not be solely held responsible for the present state of the market as most of them are doing their best to keep the market clean”.
She also blamed some customers who visit the market for contributing to the problem.
“The traders are not the only problem here. Some people who come to buy things in this market also drop their refuse in this market”.
She, however, said that the traders will continue to do their best to ensure that the market is clean.
Another respondent, a yam dealer, Mallam Habu Illah said that in yam zone, there is no problem as the traders  ensure its daily cleanliness.
“We don’t have any problem here, you can see the place is clean”, he said.
He said it is the tradition of those doing business in the yam zone to carry out daily cleaning of their shops, stressing that they will continue to keep their environment clean.
Also speaking a dealer, in frozen fish who spoke in anonymity said that the traders were not responsible for the non-evacuation of refuse heaps often a common sight in the market, as there are people designated to evacuate them.
She said that these people mostly come in the night but noted that, for some time now, they have abondoned their work.
“We traders cannot remove this heap, because we don’t have the equipment.
“We only gather them together for some people to remove them but since the beginning of this year, we have never seen anybody”, she said.
The trader, however, stressed the need for refuse contractors in charge of  Creek Road to visit the area daily for refuse evacuation.
Mrs Kate Uti, another trader, decried the state of untidiness of the market and urged the authorities to come to the aid of the traders.
“We want the government to come to this place and see things for themselves with a view to stopping those who dispose refuse anyhow.”
Mrs Uti, however, commended Governor  Nyesom Wike for promising to reconstruct the Creek Road, adding that the action will put an end to the present situation where traders cluster the  road, thereby making the place untidy.
Effort to reach the leadership of the Creek Road Market Association proved abortive as The Tide was told that both the Chairman and the Secretary were unavailable.
Commenting on the issue, an environmentalist, Mr. Steve Obodoekwe said that the government must take the situation at Creek Road very seriously to avoid health epidemic.
Mr. Obodoekwe stated that the government must live up to expectation by ensuring refuse contractors across the state live up to their expectation.
He used the occasion to command the Rivers State Waste Management Agency (RIWAMA) for taking the bold step to terminate the contracts of some service providers who were found wanting.