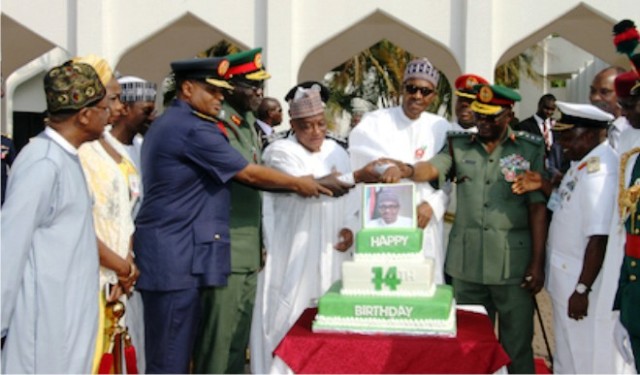 Adamawa
The Adamawa State Police Command, has said that it
would destroy Improvised Explosive Devices (IEDs), which had been recovered from insurgents in the area over the years.
A statement signed by the command’s Public Relations Officer, SP Othman Abubakar said the IEDs would be destroyed on Saturday at the military shooting range at Mayo-Ine in Fufore Local Government Area.
Abubakar urged the public not to panic during the exercise but to go about their normal businesses.
“The Adamawa State Police Command informs the public that the Anti-Bomb Squad will carry out demolition exercise of some recovered IEDs at the military shooting range at Mayo-Ine,” he said.
Bauchi

Chief of Army Staff. Lt-Gen. Tukur Burutai has said
that the military would strive to provide decent accommodation to soldiers to boost their morale and enhance their performance.
Burutai made the pledge in Bauchi while inaugurating 30 chalets at the Nigeria Army Armour Corps barracks in Bauchi.
He noted that the military had grown in units and strength, hence the need to increase welfare facilities.
While commending the building engineers for a job well done, he urged officers and soldiers to imbibe maintenance culture for the structures put in place to last.

Borno
The Nigeria Army has said it had rescued additional
605 women and children during its operation in Sambisa forest.
The Threatre Commander, Maj-Gen. Leo Irabor, stated this during a press conference at the headquarters of the 7 Division of Operation lafiya Dole in Maiduguri.
Irabor said that troops on operation rescure final have continue to record remarkable progress in the fight against counter terrorism operation in Sambisa forest.
He added that “69 male adults, 180 females, 227 male children and 129 female children, were rescued during the operation between December 7 and December 14, 2016.

Ekiti
The Ekiti State Police Command said it had arrested 85 sus
pected criminals at different locations in the state within the last one week.
A statement issued in Ado Ekiti by the command’s Public Relation officer, Alberto Adeyemi, and made available to newsmen said that the feat was achieved in a mass raid of some identified black spots in the state.
Adeyemi said the action was also part of the promise made by the new Commissioner of Police, Mr. Wilson Inalegwu, to rid the state of criminals within the first six months of his assumption of duty.
He said on December 9, combined team of Police and NDLEA operatives carried out raids on black spots and criminal hideouts at Atikankan, Mathew roundabout, Ijan motor park and Odo tipper Garage, all in Ado Ekiti.

Katsina
The Katsina State Commissioner of Police, Mr Usman
Abdullahi, has warned police officers and men in the state to shun corrupt practices or face the consequences.
Abdullahi, gave the warning during the inauguration of the “Change Begins with Me’’ campaign in the state.
He also flagged-off the distribution of rebranded Public Complaints Rapid Response Unit (PCRRU) flyers in different languages.
Abdullahi said the distribution of the PCRRU flyers was aimed at making the police force more accessible to members of the public.
Nasarawa
The  Nasarawa State Police Command has in Lafia inaugurated
the Public Complaints Rapid Response Unit (PCRRU) of the police to check corruption and professional misconduct among its  officers and men.
The Commissioner of Police, Abubakar Sadiq-Bello, while inaugurating the unit at the Lafia Market, said the initiative was aimed at addressing corruption within the police circle and enhance police public relationships.
Bello said that the PCRRU 24-hour service provider would receive complaints from the public pertaining to professional misconduct of police officers,giving assurance that such complaints will receive prompt attention.
Niger
An All Progressives Congress (APC) chieftain in Niger,
Mr. Muazu Rijau has expressed optimism that the 2017 budget would turn around the fortunes of Nigeria.
Rijau told newsmenin Minna that the task ahead was for Nigerians to support the government and pray God to ensure a successful implementation of the budget.
The politician said that the budget had what it would take to pull Nigeria out of the current economic recession and open the floodgates for developmental activities.
He explained that the budget would provide avenues for job opportunities during the implementation of capital projects.
Ogun

The Federal Road Safety Commission (FRSC) has said
the commission has embarked on massive campaign to further reduce road accidents during the festive periods.
FRSC Unit Commander, Agbado Unit, Mr. Lanre Ogundele disclosed this during the Ember Months Public Enlightenment Rally at Ijaiye Motor Park, Ojokoro, Lagos.
Ogundele noted that the rally’s theme: “Crash the Crash: Speed kills’’ was carefully chosen to alert motorists of the commission’s zero tolerance to reckless driving on the nation`s highways.
The unit commander stated that FRSC officials would be on patrols during the festive period in order to ensure reduction of accidents on the roads.

Ondo
Four men, who allegedly performed abortion of five
months’ pregnancy on a teenager, have been brought before an Okitipupa Magistrates’ Court.
They are Gboyega Amuwayo, 22, James Amuwayo, 18, Gbenga Babatunde, 20 and Egbeyelo Abilogun, 19.
The accused of no fixed addresses and occupations are standing trial on a four-count-charge of conspiracy, felony, unlawful abortion and impersonation.
The prosecutor, Insp. Zedekiah Orogbemi, told the court that one of the accused, Amuwayo, impregnated the teenager, but later lured her to abort the pregnancy.
The prosecutor said that the accused committed the offences on October 23 at Ipare-Oke Community near Okitipupa.
Osun
Justice Adedotun Onibokun of Osun State High Court
in Ile-Ife has sentenced one Fatai Jimoh and his wife, Lateefat to death by hanging for murder.
Delivering judgment, Onibokun said the prosecutor had proven his case beyond any reasonable doubt, saying that the convicts were guilty of the three-count charge of murder, conspiracy and armed robbery.
The judge consequently sentenced the couple to death by hanging for the murder of one Bukola Taiwo at Ikeketu Village near Garage Olode in Ife South Local Government Area of Osun on August 12, 2009.
The Prosecutor and state Counsel, Mr Moses Faremi, had earlier told the court that the deceased was strangulated by the couple in her rented room and her head was smashed with a sledge hammer.
Oyo

A 24-year-old  man, Joseph Onafusi, was last Wednes
day brought  before an Iyaganku Chief Magistrates’ Court in Ibadan for allegedly stealing 100 live turkeys and 40 male cockerels.
Onafusi, of an unknown address, faced a three-count charge of conspiracy, forced entering and stealing.
The Prosecutor, Insp. Sunday Fatola, told the court that accused on December 9, at about 2: 34 p.m., allegedly entered a house belonging to one Olufemi Fabunmi, to commit the offences.
The accused, however, pleaded guilty to the charge of forced entering and pleaded not guilty to counts two and three, bordering on stealing.
The Chief Magistrate, Mr Abdulateef Adebisi, granted the accused bail in the sum of N500, 000 with two sureties in like sum.
Plateau
The Nigeria Security and Civil Defence Corps (NSCDC),
Plateau State Command, said it had trained 56 private security guards from 19 private companies in the state.
The State Commandant of the corps, Mr. Solomon Olusupo disclosed this during the passing-out parade of the guards.
Olusupo said that the NSCDC which was saddled with the responsibility of training private guards operatives organised the training with the aim of giving the best to the society in terms of grass root security.
He said the exercise was also aimed at ridding the state of incompetent private security guards.

The National Agency for the Prevention of Trafficking
in Persons (NAPTIP), says it had rescued 18 under-aged girls being used as house helps in Sokoto State.
NAPTIP Zonal Head of Counselling and Rehabilitation, Hajiya Asmau Aliyu disclosed this in Sokoto when she paraded the trafficked children and two suspects.
She said that the children, aged between four and 12 years, were brought to Sokoto from Niger and Kebbi states for “child labour.”
She appealed to parents to desist from allowing some “selfish individuals” to engage their children in the obnoxious act.
Zamfara

The Zamfara State Civil Service Commission (CSC), says
it has introduced digital system of recording the data of its civil servants.
The Chairman of the commission, Alhaji Attahiru Bello, disclosed this in Gusau while speaking with journalists after defending the commission’s 2017 budget at the state House of Assembly.
Bello, said that N10 million had been earmarked for the procurement of computers and data banks to implement the programme.
According to him, the move is one of the major policies of civil service administration in the state.
The governor, Alhaji Abdulaziz Yari, had presented N107 billion before the state House of Assembly for the 2017 fiscal year.