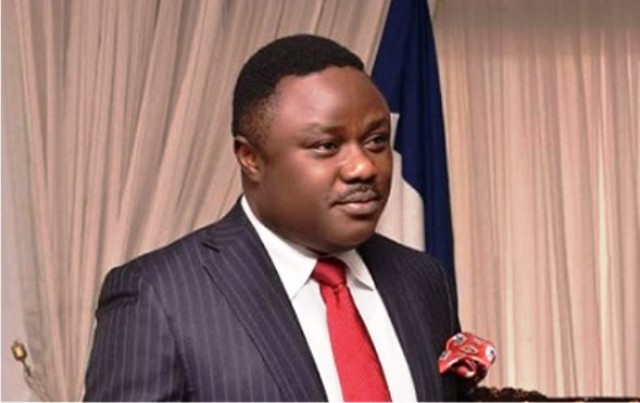 Governor Ben Ayade of Cross River State, recently dragged virtually his entire Executive Council members, comprising commissioners and special advisers, to a thanksgiving service held in honour of the Minister of Niger Delta Affairs also Mr.  Usani Usani, .
The Governor was also accompanied by his wife; Linda and Deputy Governor, Prof Ivara Esu, to the well attended occasion.
Other dignitaries at the occasion held at  Liberty Gospel Church in Calabar, included the Minister of State, Niger Delta Affairs, Mr. Claudious Daramola, Governor Rochas Okorocha of Imo State, representative of Niger State governor, the representatives of the Chief of Army Staff, Lt. Gen Tukur  Buratai, and the Chief of Naval Staff.
In his remarks, Usani said the occasion was held to thank God for the numerous blessings showered upon him, over the years.
The minister recalled how he suffered persecution each time he got promoted politically, and urged Cross Riverians to forgive and support him in the new task at hand, in order to develop the state and the Niger Delta region.
“I am not thanking God for the one year in office, but because of the several blessings He had showered upon me. I am rejoicing because these days, my life is in the hands of God. I just wish that Cross Riverians would give me a chance. Instead of reporting me; give me a chance so that I can bring development,” he said.
Usani, who described his appointment as a testimony, also charged all to support the Muhammadu Buhari- led administration, saying the APC government means well for Nigerians.
Speaking, Governor Ben Ayade urged Cross Riverians to give the minister the needed support to succeed.
Ayade, who described Usani as a truthful and humble person, said his appointment as a minister of the Federal Republic of Nigeria was divine.
He said: “It is only God that has placed Usani here.
“Don’t hurt your brother that God has elevated; lets’ join hands with him to develop our state. Pray and support him to grow so that you too can grow,” he said.
Earlier, in her sermon, the minister in charge of Liberty Gospel Church, Apostle Helen Akpabio, charged Nigerian leaders to always commit their endeavours into the hands of God so that they may succeed.
Reflecting on the topic, “National Prosperity”, she said no nation can succeed without divine intervention.
The event also attracted the National Vice Chairman of the APC, South-South, Ntufam Hilliard Etta, lawmakers cutting across the APC and PDP families, among others.