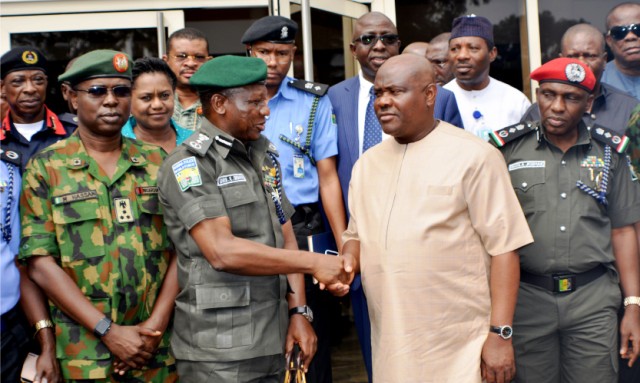 All is now set for the conduct of the rerun elections into the remaining legislative seats in the Rivers State House of Assembly, House of Representatives and the three Senatorial seats at the National Assembly tomorrow.

Consequently, all participating political parties and their respective candidates for the various elective positions have concluded campaigns to canvass for votes from Rivers electorate.

Already, the electorate across the affected local government areas and communities have been sensitised and mobilised to freely exercise their franchise on Saturday.

On their part, the police and other security agencies detailed for election duties have been adequately mobilised and fired up to provide the much needed security and protection to all participants in the electoral process without fear or favour.

Similarly, the Independent National Electoral Commission (INEC), has concluded arrangements for the exercise which has been postponed several times this year after the botched March 19 attempt.

The Independent National Electoral Commission(INEC),says all plans for the conclusion of the outstanding March 19th re run elections in Rivers State have been concluded as materials for the elections were distributed yesterday, Thursday.

The Resident Electoral Commissioner (REC),Elder Aniedi Ikoiwak who stated this on Wednesday, during a stakeholders forum in Port Harcourt, stated that the rerun elections will be held in the three senatorial districts, Rivers East, Rivers South East and Rivers West and Eight Federal constituencies seats, Tai/Eleme/Oyigbo, Andoni/Opobo/Nkoro, Bonny/Degema,Akuku-Toru/Asari Toru,Khana/Gokana, Ikwerre/Emohua,Etche/Omuma and Okrika/Ogu.

Elder Ikoiwak also explained that elections would be conducted in ten state constituency seats, comprising Andoni, Asari Toru 1,Asari Toru 11,Bonny,Degema,Eleme,Etche 11,Gokana,Ikwerre and Khana 11, adding that the elections will cut across the 23 local Government Areas and that all the three election types will hold in every polling unit.

The REC noted that Card Reader will be used during the elections as it has been deployed to the local government areas, explaining that the modified voting procedure which involves simultaneous accreditation and voting will be also used.

He further explained that the commission in a bid to ensure a credible and fair rerun election had embarked on various activities such as stock taking/distribution of non sensitive materials, reactivation of registration area centres, sensitization of stakeholders, and peace meetings.

According to him,’’ the commission also recruited ad hoc personnel, trained, received and distributed sensitive materials and had several meetings with the inter-Consultative Committee on Election Security (ICCES) to fine tune plans and to ensure that adequate security is provided for corps members, other election officials, electorates and election materials.

Meanwhile, ahead of Saturday’s rerun election in Rivers State, pro-democracy and good governance group, the Wailing Wailers, has urged chieftains of the All Progressives Congress, particularly the National Chairman, Chief Odigie Oyegun and Governor Abdullahi Ganduje of Kano State to stop making inciting statements capable of sparking violence in the state. APC rally in Rivers State.

The group, said the call became necessary, following what it described as inciting statements made by Oyegun and Ganduje, at the Mega Rally of the APC in Port-Harcourt, the Rivers state capital.

The Wailing Wailers in a statement yesterday, in Abuja by its Ag. National Publicity Secretary, Usman Abubakar said: “our attention has been drawn to the inciting statement credited to the National Chairman of the ruling All Progressives Congress (APC), Odigie Oyegun and the Kano State Governor, Abdullahi Ganduje, which has been reconfirmed.

“The statements, which they both made at the APC rallyyesterday, in the run down to the Rivers rerun, reads: “‘If they push you, push them back. If they slap you, slap them back” “As you can see, we came in force. The whole federal might is here”- Odigie Oyegun, APC National Chairman.

“‘If they shoot at you, take cover and shoot them back’-Gov. Ganduje, Kano State. “We are wondering, at what point did election become arm conflict or war in Nigeria? These dangerous and inciting statements by the Chairman of APC and Kano State Governor, must be condemned by Mr President.

If this statement is not condemned by President Buhari, it then means that APC has a plot to set Nigeria on fire. “Elections have been so peaceful, free and fair until APC took over power, and ripped the electorate their power to freely choose who they want to govern them. Since then, elections have become a do or die affair with the APC.

This is sad, we are also aware that all these are preparations to test ground for 2019. “If Oyegun and Ganduje are responsible people who love Nigeria above any selfish political interest, and also willing to lay a good foundation for the youths and incoming generation to follow, they should be working round the clock on how to ensure that Nigeria get out of the present economic doldrums their party has brought upon Nigeria.

They should not be in Rivers to brag about Federal might or to intimidate, induce voters and also incite violence. “We condemn in strong terms the statements and demand that the duo of APC National Chairman and Ganduje who left all the way from Kano state to incite violence in Rivers State, to tender an apology to Nigerians.

“We call on all Riverians to shun and not mind Oyegun and Ganduje call for violence, if you allow them to set your state on fire, they will not take part or bear the consequences with you. We therefore warn the violence promoters to desist from such acts and call for a peaceful election.”

Amaechi, Onu In Trouble …As Court Okays Suit To Arrest, Sack Them