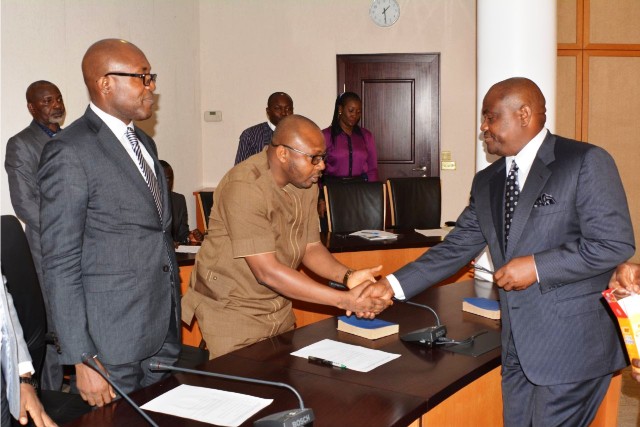 The Rivers State Governor, Chief Nyesom Wike, has called on Judges who can’t dispense Justice in line with the Constitution and the rule of law to resign from the judiciary.

He noted that the present-day realities require strength of character from judges.

“This is a time when judges require courage in the discharge of their constitutional responsibilities.

“Judges should not withdraw from cases on the ground of flimsy petitions by desperate politicians. Judges should always make sure that justice is done. Do not be intimidated”, the governor said.

The governor urged judges to always dispense justice with courage because in the course of their work, they would be threatened and faced with flimsy petitions by desperate politicians.

The two judges were appointed by the governor following the recommendation of the National Judicial Council (NJC) in line with the provisions of the law.

The swearing-in ceremony at the Government House, Port Harcourt was attended by the Chief Judge of Rivers State, Justice Adama Iyayi-Lamikanra, President of Customary Court of Appeal, Justice Christiana Gabriel-Nwankwo, wife of the Rivers State Governor, Justice Eberechi Suzzette Nyesom-Wike, other judges of the Rivers State Judiciary, Senior Advocates of Nigeria and leaders of the bar in Rivers State.

Meanwhile, the Rivers State Governor, Chief Nyesom Wike says his administration will continue to place high premium on expanding the Kingdom of God in a bid to build a spiritually and morally upright society.

Represented by the Head of Service, Barrister Rufus Godwins, the governor said despite the nation’s economic challenge, his administration would continue to ensure that Rivers people are happy, through the provision of basic social amenities, such as the rehabilitation and construction of roads, healthcare facilities, upgrading of schools as well as effective security of the state.

He described the theme of the harvest, “Harvest of Rejoicing,” as apt, as it is coming at a time when the government is gradually restoring the lost glory of the state through quality and responsible leadership.

The governor while stressing the importance of harvest, stated that “the best harvest anyone can offer unto God is the one that comes from the heart,” adding that God only takes delight in harvest from the heart.

Wike, who commended the church for their role and support in engendering the development of the society, assured of government’s commitment towards advancing the gospel, and announced that the state government will assist the church in the completion of its on-going church building project.

Earlier in his sermon, the Guest Preacher, Ven Abbey Kalio identified procrastination as a tool used by the devil to short change one’s chances of rejoicing, and advised Christians to make bountiful returns unto God as thanksgiving for all His goodness.