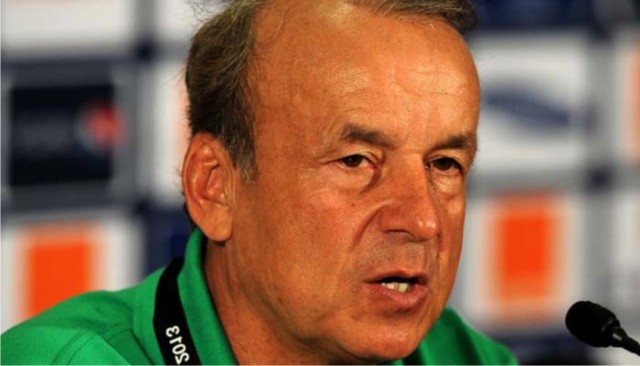 The Super Eagles Technical Adviser, Gernot Rohr, on Tuesday in Abuja said the team was on course for the crucial Russia 2018 FIFA World Cup qualifier against Algeria.
Captain Mikel Obi, Ahmed Musa and 18 others yesterday took part in the Super Eagles’ first training session at the National Stadium, Abuja.
Rohr, who spoke to newsmen after the training, said the team was right on schedule ahead of the explosive encounter.
“My players showed good signs of strength and character today. It was a good test and they are in good spirit.
“Today is our first training; yesterday (Monday) we had training with one or two players, who didn’t play during the weekend.
“We have the time to execute our plan for the game between tomorrow (today) and Tomorrow.
The team was separated into three groups and began with a light walk-out and head-tennis training under the watchful eyes of Super Eagles’ Technical Adviser, Gernot Rohr and Coach Salisu Yusuf.
Mikel, Odion Ighalo, Ogenyi Onazi, William Troost-Ekong, Moses Simon and John Ogu made up the first group.
The second group had Victor Moses, Musa, Kenneth Omeruo, Kingsley Madu and Uche Agbo.
Kelechi Iheanacho, Alex Iwobi, Musa Mohammed and Wilfred Ndidi were in the third group, while goalkeepers Ikechukwu Ezenwa and Daniel Akpeyi trained separately.
“We know we have to play against the number one team in Africa; they drew their first game, so it’s very important for us to collect all three points from this game.
“We had 20 players in training today, while three others are expected to join us tonight. So, we will be complete in the evening,’’ he said.
He, however, explained that the players were trying to recover having played for their various clubs at the weekend.
“We had a light training this morning because some of the players just played two days ago and had to connect with night flights and barely arrived some hours ago.
“We also have three injuries, not so serious, but we have to be careful with everybody.
“Leon Balogun suffered a knock on the knee, while Brown Ideye and Shehu Abdullahi have problems with their ankles.
“So, I hope they will be fit to train with the rest of the team, while we wait for the three other players to join us tonight.
“They are two Portuguese players, Oghenekaro Etebo, Goalkeeper Dele Alampasu and Monaco’s Elderson Echiejile,’’ Rohr said.