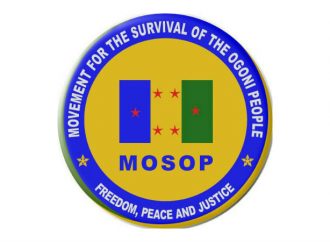 The apex platform of the Ogoni people, Movement for the survival of Ogoni People (MOSOP), has condemned in strong terms, the reported illeged demolition of residential and commercial houses at Akpajo community by Rivers State Ministry of Urban Development under the guise of an indefensible excuse of encroachment on Shell’s pipeline right of way. Akpajo is in Eleme local government area of Ogoni in Rivers State.

MOSOP has thus demanded the immediate halt to the exercise nd the withdrawal of those in from the community.

Addressing a crowd of victims of the demolition at the MOSOP secretariat, Port Harcourt, the President of MOSOP, Mr Legborsi Saro Pyagbara said: “While I entreat you to remain peaceful and law abiding, I must not fail to express my disappointment at the approach of the Ministry of Urban Development, which without any prior official notice to the people, stormed the community with bulldozers under the shield of sophisticatedly armed security operatives including solders and mobile police men, and commenced demolition of homes. The exercise no doubt, violates the right of the victims to shelter protected by our laws and other international instruments.

“The criminal manner with which the entire thing has been handled, especially the failure to allow a period of grace is unfair and suspect. It appears some criminals with great political clout may have influenced this controversial demolition. This is mere so as the pipeline in question is owned and managed by the oil mogul, The Shell Petroleum Development Company Limited (SPDC). I, therefore find it difficult to rationalise why the ministry would be the institution to demolish “structures” allegedly built on Shell’s pipeline right of way instead of the trans-national corporation.