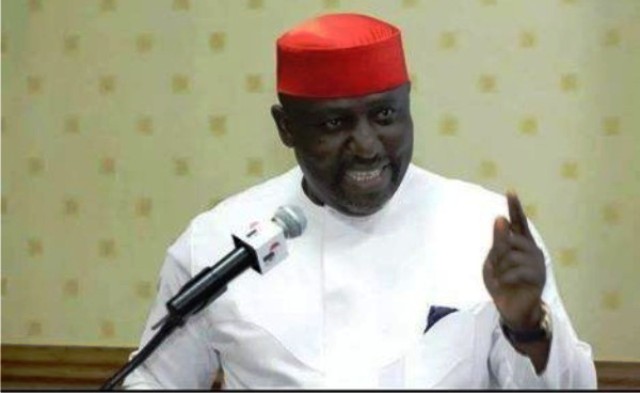 The former Governor of Imo State, Dr Ikedi Ohakim has overtly accused the incumbent Governor, Owelle Rochas Okorocha, of fully contributing to the recent relegation of Heartland Football Club, Owerri, to the Second Division.
He made the disclosure in Ikeduru recently when he delivered a lecture/keynote address in a synod held at Saint John’s Anglican Church, Owu-Amakohia, Ikeduru.
The former governor through the Synod theme: Cultivating Contentment As A Flower Of Heaven”, reiterated that Heartland players got relegated to the Division Two due to their disobedience to the referee during their last match with Plateau United of Jos.
He stated that the players of Heartland walked out of the football pitch during their last match, noting that they emulated such disobedience from the state Governor, Owelle Rochas Okorocha, who has penchant for not obeying the rule of law.
He blamed the governor for not taking adequate financial treatment of the club seriously, compared to his administration that gave Heartland Football Club all the required facilities to operate, which enabled them to win some laurels.
According to the Ohakim, “In my regime, I contracted Ben Iroha, Sampson Siasia, Kalu Nwankwo and Ikeh Shoromu, who brought in a wonderful football development to the club.
He frowned at a situation where Heartland Football Club has been the only Division One club in the South-East that has been on relegation against the expectations of the people.
The ex-governor asserted that the way the Heartland Club was underfunded by the governor affected other segments of the state, making Imolities lose interest in government activities.
He said that good governance, as drawn from the tenure of the synod, are qualities expected that should move the country forward, pointing out that good leaders should always exhibit certain notable features associated with eagles which must include vision, courage and fearlessness.
Meanwhile, in a keynote address by the Ikeduru Anglican Diocesan Bishop, Rt. Rev. Emmanuel Chigozie Maduwike, urged leaders to be contented as one of the flowers of Heaven, which calls for effective cultivation by all Christians.
The revered Bishop noted that contentment would not grow naturally in humans without learning it.
He made reference to the book of Philippians 4:11. The synod attracted a good number of personalities from both religious and political bodies.

Why I Left Plateau United -Baraje