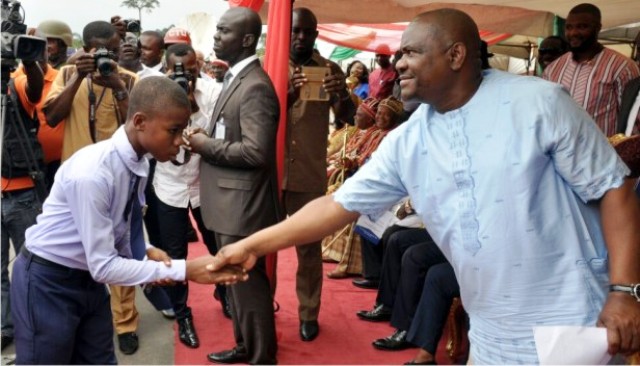 The people of Ewupe,
Isorosi and Ijaliye communities in Ota, Ogun State, rolled out the drums in a fanfare, recently, at the opening of multimillion naira new school facilities donated by Shell Nigeria Gas (SNG) the downstream subsidiary of Shell in Nigeria.
The projects, executed in co-located Ebenezer African Church Primary School and African Church Community Secondary School in Ewupe within SNG’s operational area included new and upgraded blocks of classrooms, football field, toilets and water facilities.
Speaking at the ceremony, Managing Director of SNG, Mr. Toyin Adenuga, described the investment in the two public schools as part of the broad social investment programme of the company.
“We recognise education as the topmost need of the people of our neighbouring communities and what we have done is a progression of our longstanding support to these schools and to the communities,” Adenuga said.
He noted that SNG was committed to supporting initiatives aimed at closing the opportunity gap between students in rural public schools and their counterparts in private schools.
In her speech, Ogun State Commissioner for Education, Mrs Modupe Mujota, commended SNG’s investment in the schools and charged the students to take full advantage of the ultramodern school infrastructure to “upscale their academic performance and competitive exploits”.
Represented by the Director of Secondary Education in the State, Mrs. Abosede Ogunleye, the Commissioner noted that the cost of education was capital-intensive and that public-private partnership in education was a viable option to overcome the funding challenge.
“This administration has never pretended to be benevolently buoyant enough to singlehandedly underwrite the cost. This is why we have always beckoned on corporate concerns, public spirited individuals, and non-governmental organisations to team up with us in lifting the education sector to great heights,” Ogunleye added.
An elated Principal of African Church Community Secondary School, Mr. Gbolahan Adekunjo, described SNG’s support to the school as ‘a spectacular, historic and positive one that has transformed the life of the schools.’
He added, “The company has put smile on the faces of not only the students, staff and parents but the entire Ewupe and Ota community as a whole.”
The event was witnessed by senior government officials, traditional rulers, community leaders and leadership of the community development committees in Ogun State.

Varsity Don Calls For Better Use Of Petroleum Revenue