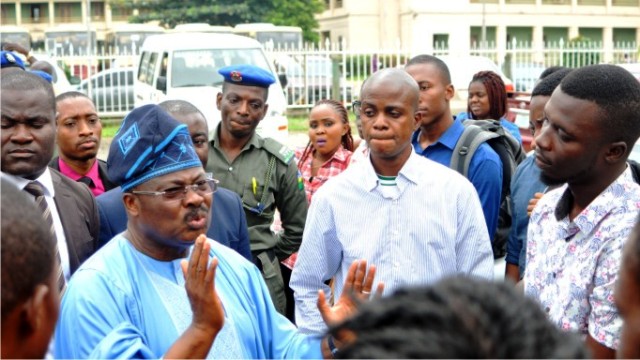 Benue
The Benue State Investment and Property Devel
opment Company (BIPC) says it is poised to break its jinx of a non-profit making organisation by declaring huge profits in the next six months.
The company’s new Managing Director, Mr Jack Mulya, made this known in an interview with newsmen in Makurdi.
Mulya who expressed regrets that the company failed to make any profit in the last 15 years, stated that the company was restructuring and repositioning for profit making.
“We need to run this place as a business venture and to do this, we need to build capacity for our workers and restructure our assets for profitability.”

The Nigerian Army has called on commercial banks
to deploy Automated Teller Machines (ATM) to the military barracks in Maiduguri for the use of front line soldiers involved in the ongoing counter-insurgency operation in Borno State.
Brig.Gen. Victor Ezugwu, the General Officer Commanding (GOC) 7 Division, made the call while speaking at a Civil-Military Forum organised by the Nigerian Army in Maiduguri.
Ezugwu was reacting to criticisms by residents that soldiers often refused to join queues at the ATM points in the town.
He said that the army had written several letters to the banks for the deployment of ATM machines to the barracks without much success.

FCT
A human rights activist, Mrs Esther Uzoma, says
the Nigerian legal system must create an enabling environment to encourage whistleblowers in the fight against corruption.
Uzoma made the call in an interview with newsmen in Abuja recently.
She said that the importance of whistleblowing would not be effective without providing enabling environment backed by legislation.
The activist said that Nigeria’s social environment as currently constituted was not yet ripe for whistleblowers due to weak institutions.

The Jigawa State Government has commenced
aerial spraying of pesticides to control quela birds that ravaged rice and millet farmlands in seven local government areas of the state.
The Special Assistant (SA) to the Governor on Community Development and Inclusion, Alhaji Hamza Muhammad, made this known in an interview with newsmen in Dutse.
Muhammad said the affected local governments were Auyo, Kirikasamma, Miga, Guri, Birniwa, Kaugama and Malammadori.
He said the exercise which commenced on September 15, would end on September 24.

Gombe
The Gombe State Government has urged  the people
of the state to imbibe the culture of tree  planting and  desist from indiscriminate felling of trees.
The Commissioner of Environment, Hajiya Sa’adatu Sa’ad,  made the call at a news conference in Gombe recently.
Sa’ad said that it was high time the people contributed their own quota towards environmental protection against desertification and other climatic challenges in the state.
“Desertification has been our main problem that is really disturbing us in Gombe State, so, such effort will help a lot in protecting our environment.

A member of the House of Representatives, Abbas
Tajudden, says the Federal Government would spend N1.6 billion on the rehabilitation of Zaria-Pambegua Road in Kaduna State.
Tajuddeen, who represents Zaria Federal Constituency, made the disclosure in an interview with newsmen in Zaria shortly after a meeting with his constituents.
He said the rehabilitation work would begin this year and would cover over 100 kilometres.
The lawmaker explained that the project was initiated to save lives due to frequent accidents because of the deplorable nature of the road.

Authorities of Garun Malam Local Government
Area of Kano State say no fewer than 40, 000 children below the age of five years would be immunized in the ongoing exercise in the state.
The Primary Healthcare Coordinator of the area, Alhaji Tijjani Jafaru, made this known to newsmen as immunisation commenced in the area.
The coordinator reaffirmed the commitment of the state and the local government to polio eradication.
According to him, parents must complete their responsibility of providing their children with quality health care.
Kwara

A pharmacist, Mr Lanre Alege, says registered phar
macists in Nigeria are grossly inadequate, considering the population of the country.
Alege of the University of Ilorin Teaching Hospital (UITH), said this in Ilorin in a lecture delivered during the monthly “Keep Fit exercise” for members of staff of the institution at the Kwara Stadium Complex.
Quoting the records of the Pharmaceutical Society of Nigeria (PSN), he said Nigeria has 17,000 registered pharmacists,
“Nigeria, the most populous black nation in the world with estimated 170 million people (2012 population) can only have a pharmacist to 10,000 Nigerians by that number,’’ he said.
Lagos

Governor Akinwunmi Ambode of Lagos State has
urged commercial drivers to help reduce the incessant gridlock in the state by respecting traffic rules and regulations.
Ambode made the call at the inauguration of Ketu-Alapere Lay-By and Bus Stop Expansion at Kosofe, Lagos.
Represented by his Deputy, Dr Idiat Adebule, the governor said transport unions must educate their members to abide by the state traffic laws, adding that commercial drivers should not to use the expanded Alapere-Ketu Bus stop for union activities, as anyone caught would be sanctioned.
Osun

The Osun State Government has deployed an
Armoured Personnel Carrier (APC) to Ibokun community in the state to enable Wema Bank to reopen for commercial activities.
Our correspondent reports that WEMA bank, the only commercial bank in the town was shut for business activities in December 2015 due to a robbery attack.
A gang of armed robbers had on December 15, 2015 attacked the bank, during which two people were killed, many injured and a large sum of money carted away by the robbers.
One of the conditions listed by the bank’s management to resume operation was the provision of an armoured vehicle by the government to guarantee the security of its business.

The Sokoto State Government has redeemed the
N1.98 million it pledged to the three cleanest local governments during Hajj.
The Director-General of the State Pilgrims Welfare Agency, Alhaji Ibrahim Umar, made the disclosure in an interview with newsmen in Sokoto recently.
Umar said that the competition was introduced by the state government during the 2015 hajj.
“It was conceived to encourage personal and environmental hygiene amongst the pilgrims in Mecca,Muna and Arafat.”

The Zamfara State Government, says it has re
corded increase in malaria-related deaths among children under five years and pregnant women.
The Project Manager of the State Malaria Elimination Programme (SMEP), Alhaji Hamisu Dauran, made this known while speaking at the commencement of a one-day training of religious and traditional leaders on malaria eradication.
Our correspondent reports that the training was organised by the Nigerian Inter-Faith Action Association (NIFAA) in collaboration with Health Community Capacity Collaboration (HC3), a non-governmental organisation (NGO).
Dauran said that within the first and second quarters of 2016, the state recorded 276 deaths and over 76,000 reported malaria cases of under-five children across in health centres across the state.