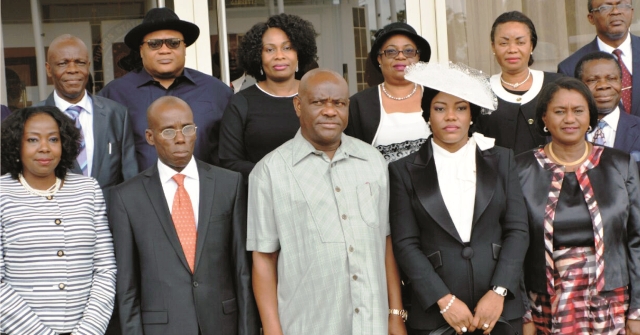 As the Rivers State Government, on Friday, ended its biometric data capture of all civil servants under its payroll, no fewer than 48,000 workers have been officially documented as bona fide staff of the government both at the state and local government levels.
If the figure remains the same at the conclusion of the exercise, it means that the state government may declare more than 7,000 persons, who hitherto were collecting salaries from the government treasury, as ghost workers.
In a statement, the Senior Special Assistant to the State Governor on Information Communication Technology (ICT), Mr William Idoniboye, confirmed that the exercise officially ended last Friday, after three and half months since it began on April 15th, warning that any worker not captured within the period will have him or herself to blame.
According to him, “any mainstream civil servant who has not enrolled, missed their enrolment date, or any other issues strictly relating to not having undergone biometric verification were advised to do so with immediate effect on the closing date being Friday, July 29, 2016”.
So far, he disclosed that mainstream civil servants have been captured, including those at the boards, parastatals, ministries, departments and agencies.
He, however, said a window of opportunity remains open for those who travelled or are incapacitated during the period of exercise, urging them to send their bio-data, BVN and employment information to RVSG.ICT@gmail.com for further directive.
Idoniboye lauded Governor Nyesom Wike for providing the necessary support to the ICT Department to ensure a smooth conduct of the exercise, which he affirmed, will enhance efficiency and transparency in the civil service.
The Tide recalls that the exercise commenced on April 15, 2016, when the governor announced plans to ascertain the number of civil servants on the government payroll over rising monthly wage bill.
So far, the exercise has been a huge success, as about N2billion has been saved from the monthly wage bill of the state government.
Prior to the commencement of the exercise, the number of workers on the state government payroll was put at about 55,000.
The Tide investigations reveal that if the present figure of 48,000 remains unchanged at the end of the exercise, the state government might declare over 7,000 as ghost workers in the near future.
Meanwhile, the State Government has announced that the Biometric Verification exercise for retired civil servants under the Pensions Board will start on Friday, August 5, 2016.
A statement released last Saturday, and signed by the Senior Special Assistant (ICT) to the Governor of Rivers State, William Idoniboye, and Director of Pensions, Sunday Biranen, indicated that all pensioners under the Rivers State Pensions Board will be invited on a daily basis, through a detailed schedule to be announced in the media.
The statement said biometric verification exercise, which starts on August 5, will take place at the Government House Old Auditorium.
According to the statement, “the ICT Department and Pensions Board will be making announcements in the media about the exact groups to come, in order to handle the biometric enrollment of our esteemed pensioners, who have served the state, with the utmost attention and care, as well as in order to maintain an orderly exercise where pensioners will be treated with full respect and accorded a pleasant environment with special arrangements for the disabled or physically challenged.
“With this notice, we are informing the general public and specifically all pensioners under the Pensions Board that the biometric exercise for Rivers State pensioners is hereby starting, and exact details of the dates and times will commence being announced over main radio stations and media channels from next week.”