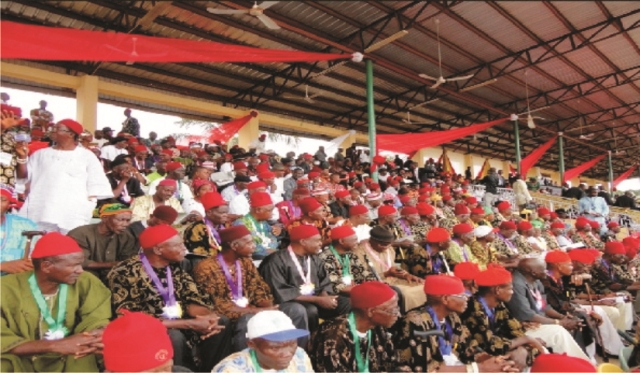 President General of the
Igbo socio cultural body, Ohanaeze Ndigbo, Chief Gary Igariwey and other leaders of the organisation narrowly escaped death yesterday when a trigger happy policeman opened fire at the National Secretariat of the organisation in Enugu.
It was gathered that Igariwey, and other leaders of the body, including the National Secretary, Dr. Joe Nwaorgu had converged at the  secretariat located along Park Avenue, Enugu for the National Executive Committee (NEC) meeting of the organisation.
The meeting was almost marred by a lingering leadership tussle between two factions of the youth wing of the organisation, Ohaneze Youth Council (OYC).
Trouble however, began when the National Publicity Secretary of the youth wing, Obinna Adibe who belonges to the Arthur Okafor faction came with some policemen from the Enugu Area Command to arrest one of the youth leaders, Alex Okemiri.
Adibe had in a petition to the Enugu Area command accused Okemiri, who belonged to the faction of the National President, Ikechukwu Isiguzoro, of impersonating him in text messages he circulated, summoning a meeting.
While the policemen from the Area Command who were on plain clothes were trying to force Okemiri into a waiting vehicle, the Deputy President of Ohanaeze Ndigbo, Hon. Ogochukwu Onyema ordered a policeman attached to him to use every means at his disposal to stop Okemiri’s arrest.
Obeying his master’s order, the mobile policeman immediately, raised his rifle and fired into the air, sending Igariwey, Nwoargu and other Ohaneze leaders at the premises of the secretariat scampering for safety.
After recovering from the shock of the gunfire, the Ohaneze president, who was disorganised by the development, started appealing for calm between the warring factions of the youth wing.
Igariwey pleaded with Adibe to tell the plain clothes policemen with him to leave Okemiri and allow him to use internal mechanisms of Ohanaeze Ndigbo to resolve the quarrel.
The policemen from the Area Command reprimanded the mobile policeman for obstructing arrest and later left the Ohanaeze secretariat while the NEC meeting resumed.
Our correspondent learnt that the meeting was convened to deliberate on the report of a panel set up by Ohanaeze to resolve the crisis in the youth wing of the organization.
Before the commencement of the meeting, members of the Arthur Okafor led faction, had attempted to stop the OYC National President, Mazi Isiguzoro from entering the conference hall and venue for the meeting.