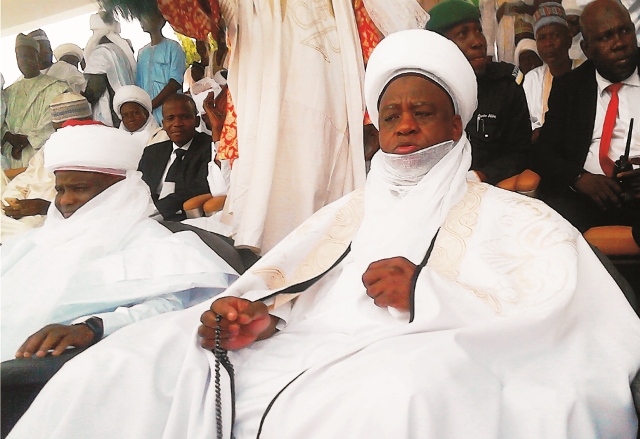 The wife of the President, Mrs Aisha Buhari, has pre
sented about N30 million cash support to parents of the abducted Government Secondary   School (GSS) Chibok students in Borno.
Buhari, represented by the wife of the Borno governor Hajiya Nana Shettima, presented the cash to the parents at a ceremony in Maiduguri.
She explained that the gesture was aimed at assisting the parents with some financial support towards alleviating their sufferings.
Buhari pointed out that the presentation was in fulfillment of her promise to assist the less privileged and victims of insurgency in the North East.
“Today’s presentation was in fulfillment of the promise I made earlier in the year during my book launch in Abuja.
“I made a promise that the proceeds will be used to better the lives of women and victims of insurgency in the North East,” she said.

Nigeria and the People’s Republic of China have signed
a bilateral agreement of over eight million China’s Yuan (about 400 million naira) for various projects in the FCT.
The projects were feasibility studies of the second phase of the Abuja Solar Powered Traffic Control Signal, Agricultural Demonstration Centre and the 2016 Bilateral Training Programmes.
This is contained in a statement issued by Mr James Akpandem, Media Adviser to Minister of Budget and National Planning  Senator Udoma Udo Udoma, in Abuja.
“The agreement was signed at the sixth session of the Economic, Trade and Technical Cooperation Joint Commission meeting in Abuja.
“The agreement is a prelude to Chinese government’s full involvement in the projects once they are certified feasible.
“The project will be funded through gratis assistance as part of the 2012 Economic and Technical Cooperation Agreement between the two governments,” the statement said.

The Nigeria Security and Civil Defence Corps (NSCDC)
in Jigawa State says it will deploy 1,500 personnel to ensure hitch-free sallah celebration in the state.
The NSCDC Commandant in the state, Malam Muhammad Durumin-Iya, made this known in an interview with newsmen in Dutse.
Durumin-Iya said the officers would be deployed to Dutse, the state capital and other major towns across the state.
He explained that the gesture was to provide adequate security during and after Sallah celebrations across the state.
“As part of plans to ensure hitch-free event, and adequate security, during and after Sallah in Jigawa, we will also deploy about 150 special force, which comprises of Special Armed Squad and Counter Terrorism Squad”, he said.

The Nigeria Security and Civil Defence Corps (NSCDC)
in Kwara State, says it has deployed 2,500 personnel across the state to ensure protection of lives and property during the Eid-al-fitr celebration.
The Kwara Commandant of the corps, Mr Pedro Ideba, disclosed this in llorin during an interview with newsmen.
He said that the personnel had already been deployed in all the 16 local government areas of the state to ensure a hitch free Sallah celebration.
The commandant said that the corps was collaborating with other security operatives in the state to achieve this.
Ideba said that personnel had been dispatched to all the Eid praying grounds and other sensitive locations in the state to provide adequate security.
The commandant warned residents of the state against taking laws into their hands, adding that any person or group of peoples who constitute security threat would be dealt with.

Group Managing Director, Lagos State Water Corpora
tion, Mr Muminu Badmus, said its officials would be visiting residents to verify their complaints toward boosting service delivery.
This is contained in a statement signed by Mr Rasaq Anifowoshe of the corporation‘s Public Affairs Division.
According to him, the visit is designed to help the corporation improve water services to every home in the state.
‘’Lagos Water Corporation is planning to visit Water Customers for effective Service delivery.
‘’The exercise will start from Surulere Area of the state on July 7, and will be extended to other parts of Lagos metropolis”, he said.

Nasarawa State Police command says it has deployed
over 2,000 officers to various strategic places in the state in order to ensure a hitch-free Eid-el-Fitr.
The State’s Commissioner of Police, Lawal Shehu, told newsmen in Lafia that appropriate measures were being taken to forestall any breakdown of law and order during the festivity.
He said officers had been placed on surveillance patrol of identified flash points of violence and criminality across the state.
“Hoodlums usually take advantage of festive periods to perpetrate crimes but we are ready for them this time,” he said.
Shehu called on members of the public, especially Muslim faithful, to cooperate with the police to safeguard lives and property.

Former President Olusegun Obasanjo, says the intro
duction of single currency by West African states would promote economic integration and progress within the region.
Obasanjo said this while playing host to the President, Economic Community of West African States (ECOWAS), Commission, Mr Marcel de Souza, at his hilltop estate, Abeokuta.
The former president said it was high time the organisation started using single currency, adding that it would help boost the economy of all members of ECOWAS.
“We have decided that our unit of currency will be ‘eco’, let us now start using eco, let eco become our unit of currency.
“Single currency unit for ECOWAS states will bring about more development and growth among the states”, he said.

Japan International Cooperation Agency (JICA) has
handed over completed school projects worth 1.3 Japanese Yen (N2 billion) to the Oyo State Government.
JICA handed over the projects to the state government at a ceremony held at St. Luke’s Demonstration School, Molete, Ibadan.
The Chief Representative in the Nigeria office of JICA, Mr Hirotaka Nakamura, said that the sum was expended on 231 classrooms, two staff rooms and 218 toilet booths spread across 30 schools in the state.
Our correspondent  reports that the classroom blocks were furnished with desks, chairs and blackboards.
“The completion of this project brings the total number of classrooms constructed in the education sector in Nigeria to 1, 038 classrooms and 999 toilet booths since December 2014 till date”, he said.

Sokoto State Government has purchased 9,000 metric
tonnes of fertiliser and 16,000 water pumps worth about N 1.7 billion to be distributed to farmers in the state.
The Commissioner for Agriculture in the state, Alhaji Umaru Nagwari made the disclosure in Sokoto in an interview with newsmen.
According to Nagwari, the assorted fertiliser and water pumps will be distributed to both dry and rainy season farmers across the 23 local government areas of the state.
Nagwari said that the fertiliser, which comprised of Urea and NPK brands, were bought at about N8, 000 per bag but would be sold to the farmers at 75 per cent subsidy.
The commissioner also disclosed that the state executive council had approved the purchase of Faro rice seedlings worth about N392 million for distribution  to the farmers free of charge.