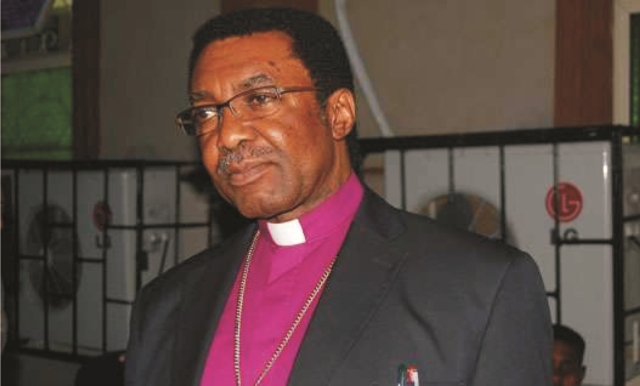 The Archbishop of
Enugu Ecclesiastical Province (Anglican Communion), Most Rev. Dr. Emmanuel Chukwuma, has accused President Muhammadu Buhari of being insensitive to the plight of  Nigerian masses.
The Anglican Cleric, who stated this  while delivering his address at the sixteenth Synod of Enugu Diocese held at the Church of Resurrection Power, New Haven, Enugu, equally said that Buhari was running a “corrupt administration.”
While condemning the President’s leadership style, he said it was sad that Buhari, who brags about anti- corruption, had taken delight in plunging the people he was elected to serve into hardship and suffering through his policies and programmes.
According to him, “It is corruption on your part if you increased prices of almost everything without palliatives to the people.
“There is hunger in the land, the people are complaining and crying and the one elected to serve us is enjoying his life at Aso Rock.
“That means he is corrupt, he did not increase salary, he did not promote workers.
“The other day, he addressed workers at Aso Rock, he did not talk about their welfare but only asked them to shun corruption. How can somebody who is hungry shun corruption? I think there is a limit to what people can take.
“I advise him to be careful so as to avoid people taking laws into their hands”,.
He maintained that the federal government should reduce interest in the fight against corruption and introduce policies and programmes that would impact on the well-being of the people.
Commenting on the renewed militancy in the Niger Delta region, terrorism and civil unrests, Chukwuma warned that the situation was bound to increase with the alleged government’s silence on the plight of Nigerians.
“Today, there is no electricity anywhere, shops and businesses are closing by the day due to high prices of goods and services. Petrol is not affordable, likewise kerosene and cooking gas.
“It will appear that there is no leadership. All the promises made by the APC upon which the people voted them in have fallen apart. We cannot continue like this. We need to give the people some measure of hope and show them that government is concerned by the situation of things”.
Calling for restraint in the bombing of oil facilities by the Niger Delta Avengers (NDA), he stated that time had come for justice to prevail  by paying adequate attention to the plight of the people of the area.
“Only a leadership that is totally committed to justice and a properly structured Nigeria can solve the identity, resource ownership and other crisis of development in Nigeria.
“While the provision of the infrastructure and sustainable development is important, there can be no enduring peace in the area or any part of Nigeria, for that matter, if injustice to the people of the Niger Delta is not comprehensively addressed. Specifically, a truthful commitment to the principle and practice of federalism is what can bring peace and prosperity to Nigeria.
“It is high time government took a total look at the plight of the people, feel their pains and redress the situation of the long-suffering majority who has not been the real beneficiaries of the token tagged Amnesty programme.
“While the programme has made some militant rich, it has not addressed the huge infrastructure challenges and poverty in the area”.
Continuing, Chukwuma said that the renewed militancy and terrorism had further crippled the economy, stressing that immediate, medium and long term solutions should be found to the problems.