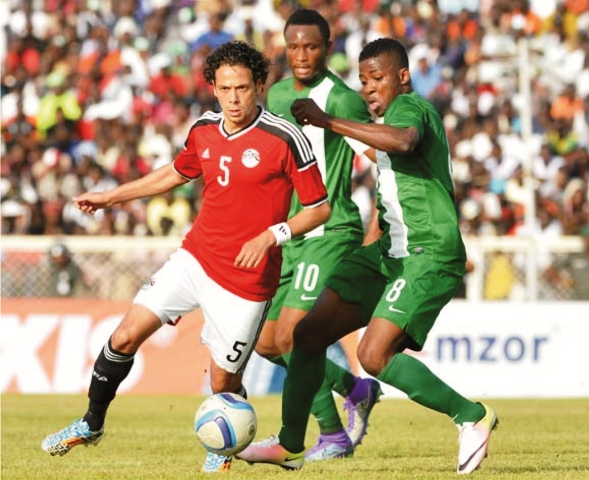 Following the draw for the
2018 FIFA World Cup qualifiers which has seen Nigeria drawn in a difficult Group B with Algeria, Cameroon and Zambia, reactions among Nigerians have gone into an overdrive.
As is now usual, pessimism, rather than optimism is renting the air, with most Nigerians already giving up hope before the first ball of the qualifiers is kicked.
Recent qualifiers for major competitions have not ended well for Nigeria, as the Super Eagles  failed to make the 2015 and now 2017 Africa Cup of Nations.
Several reasons have been attributed for Nigeria’s recent failures in qualifying for tournaments.
However, blow are  seven things that should be done to ensure the Super Eagles make it to  the next World Cup in Russia.
1. Get a substantive coach NOW!
This seems obvious but it is one thing that must be done as soon as possible. The team has been without a substantive coach since February, when Sunday Oliseh quit the post and they have had four coaches (both interim and substantive) in the last one year.
That is surely not good enough and if the Nigeria Football Federation NFF is serious about curtailing Nigeria’s recent failures to qualify for major competitions, this should be their first line of action following the draw.
2. Sort out usual poor travel arrangements
It says a lot that the Super Eagles were unsure of their mode of transport 72-hours to the crucial Africa Cup of Nations qualifier against Egypt in Alexandria last March.
If the Nigeria Football Federation, NFF are serious about qualifying to the Russia 2018 World Cup, such issues should not even arise.
Travel plans should be sorted and known well ahead of time.
The NFF has been complaining about paucity of funds, but it should sort itself  out before the start of the qualifiers as Nigerians will not accept another excuse from them if they failed to make it to another major tournament.
3. Sort out players’ bonuses and allowances
The players of the Super Eagles have not been paid their match bonuses and allowances over the last five games and counting and word is that the lads are unimpressed.
This is one area the NFF must work on.
Whatever the plan is, they must put them in motion now and communicate such to the players, rather than waiting for when the qualifiers begin.
It has been revealed that the technical committee of the NFF has decided against the payment of bonuses on a per-game basis and while that is laudable given the current financial situation, it is also advisable same is immediately communicated to the players for better understanding before the start of the qualifiers.
4. Who will play for the Super Eagles?
This may seem like a mundane question, but its importance cannot be overemphasized. The qualifiers for the 2015 and 2017 AFCON saw the team being chopped and changed game after game, with very little or no consistency in the set of players used.
This particular area is dependent on the coach and whoever it turns out to be, must ensure he gets a core set of players to execute the qualifiers and that is not to say there won’t be room for replacing misfiring players or bringing in in-form ones, but there must be a core set.
Like one of the players said recently: “Why are we always changing players? It’s difficult playing with a new player today and tomorrow he is replaced by another one.”
It says a lot that over the last one year, the team have had three captains.
5. Make home games difficult for opponents
Nigerians and the Super Eagles are always nice to opponents when playing at home…too nice. And to imagine they don’t usually get as much from opponents when they play away, it’s a bit surprising to say the least.
This is not to say opponents should not be accorded due respect and warmth, but the players must man-up and stop being naïve all too often on the pitch.
A recent case in study is the 1-1 draw with Egypt in Kaduna in a 2017 AFCON qualifier.
Leading 1-0 with stoppage time left, the players – Carl Ikeme especially – should have known not to kick the ball too close into touch when Godfrey Oboabona went down. That singular act resulted in Egypt scoring and dashing Nigeria’s qualification hopes.
Then the fans must also play their part. There are  games where they actually boo the Super Eagles and cheer the opponents. That should never happen again. Get behind your team and support them till the end.

row since the present administration came into being in 2014.