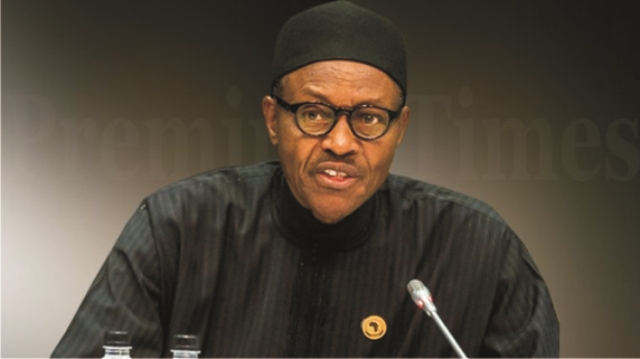 President Muhammadu Buhari, yesterday, charged public officers entrusted with certain responsibilities to live up to their duties and justify the confidence reposed in them.
He said this was the only way Nigeria could  overcome current hardships facing the nation.
Speaking in Abuja while decorating two of the newly promoted officers of the Nigeria Police Force Abdulkarim Dauda and Kayode Sikiru Akande promoted from the position of Assistant Commissioner of Police to Deputy Commissioner of Police respectively and deployed to his office, the president who congratulated the officers, urged them to justify their new ranks by increasing their commitment to the service of the nation.
He also commended them for their hard work and achievements which prompted their promotion.
A statement by the Senior Special Adviser to the President on Media and Publicity, Mallam Garba Shehu quoted the president as stressing that Nigeria needed their dedication and unwavering commitment for it to achieve greatness and assume its rightful position, cautioning them not to abuse their positions.
The promoted cops would serve as Chief Personal Security Officer to the President and the Officer in Charge of Presidential Movement respectively.
Meanwhile, President Muhammadu Buhari, yesterday, in Lagos revealed why he retained the former Inspector-General Police, Solomon Arase when he assumed office.
This came as different speakers took turns to commend the laudable achievements of Governor Akinwunmi Ambode of Lagos State since assumption of office on May 29, 2015, at the public presentation of a book, “Cascade of Change: A decade of liberal thoughts.”, written by the Lagos State Commissioner for Information and Strategy, Mr. Steve Ayorinde, held at the Nigeria Institute of International Affairs (NIIA), Kofo Abayomi Street, Victoria Island, Lagos.
The discussions on the book centred on Governor Akinwunmi Ambode’s first year in office.
The President, who was the Special Guest of Honour, while speaking through his Special Adviser on Media and Publicity, Mr. Femi Adesina, said he retained Arase not because of his strategy and tactics as a police, but because of Arase’s intellect and capacity as an operation person. Adesina, quoted Arase as saying that it was very strange for him to have been invited for a farewell dinner.
Adesina, who spoke about the reaction of the immediate past IGP to a farewell dinner organised in his honour by Buhari, said Arase had expected that he would be sacked before the end of his tenure.
His words: “While he (Arase) was speaking at the dinner in Abuja, he told the President that it was very strange for him to have been invited for a farewell dinner, because, what we know in Nigeria is that, you are sacked on pages of newspapers.”
According to Adesina, Arase, also had the fear that, since, he was inherited by Buhari’s administration, he was not sure that he would be retained, so every day, he had the trepidation that he would hear that he had been removed”.
But quoting President Buhari on why he retained Arase till the end of his tenure, Adesina said: “When it was the turn of the president to speak, he explained why he kept Arase as IGP.
“He said, he saw the quality of his mind and he saw the quality of things, he had written. You know Arase has many publications to his credit and he also saw his capacity as an operation person and he decided to keep him till his tenure expired.”
According to Adeshina, “Mr. President appreciates sound mind and intellect and that shows the goodwill he has for Mr. Steve Ayorinde, the author of the book we are launching today.”