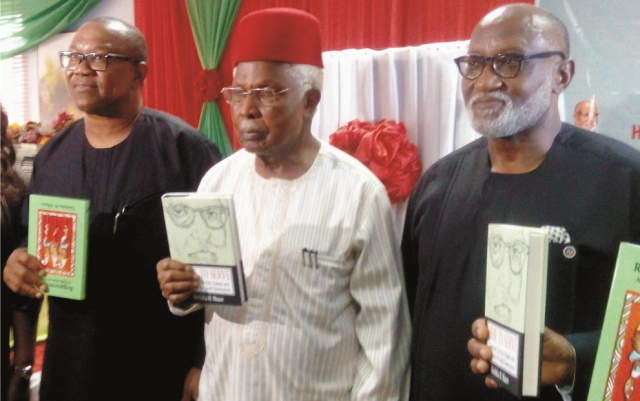 The Bishop of the Niger
(Anglican Communion), Rt. Rev. Owen Nwokolo, has commended President Muhammadu Buhari’s zeal on the war against corruption, criminality and terrorism since his assumption of office.
Nwokolo gave the commendation at the first session of the 30th Synod at St Andrew’s Church, Obosi, Idemili North Local Government of Anambra State.
He, however, said that the war should not be selective with regard to those persons, organisations or regimes that should be targeted.
“It is regrettable that Nigeria’s natural resources have been so badly mismanaged over time,’’ he said.
The bishop bemoaned the poor state of federal roads across the country, particularly in the South-East geopolitical zone, and urged the Federal Government to use the looted funds that were recovered to repair the roads and other infrastructure.
“The recovered looted funds should be ploughed back to poverty alleviation ventures which are verifiable, for the war against corruption to be meaningful,’’ he said.
Besides, Nwokolo urged Buhari to address the problems of poor power supply and fuel scarcity, while making the prices of petroleum products affordable for the masses.
The bishop also commended Gov. Willie Obiano of Anambra for his achievements within his two years in office, citing improved security, roads, bridges, prompt payment of workers’ salaries and education as some of the feats.
Nwokolo, however, appealed to the state government to promptly intervene and save St Philip Central School in Akpakaogwe, Ogidi, Idemili North Local Government Area, from collapsing.
“The school is where the literary icon, late Prof. Chinua Achebe, had his primary education and one of the schools that were handed back to the mission by the state government,’’ he said.
He recalled that the former President Goodluck Jonathan and his Ghanaian counterpart, John Mahama, promised to jointly reconstruct the school during the Achebe’s burial in 2013.
He said that the contract for the school’s rehabilitation was awarded in 2014 under the aegis of the Anambra State Universal Basic Education Board.
Nwokolo, nonetheless, claimed that the contractors who handled the project did a shoddy job, thereby posing danger to lives of the pupils and teachers of the school.
“The building has grave structural defects. The floor tiles as well as the ceiling are giving way; the building has yet to be equipped with furniture for pupils and teachers,’’ he said.
The bishop also noted that the borehole drilled by the contractors was non-functional because of the lack of a power generating plant to pump water.
“In fact, the work done at the school is below the expected standard. It is a shame that such a shoddy job is said to have been executed for our revered icon, Prof. Chinua Achebe,’’ he said.