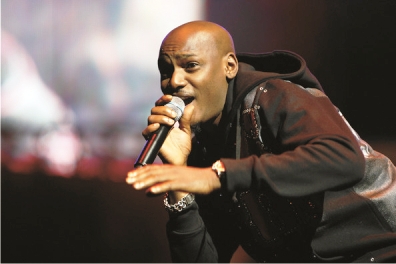 Nigerian music veteran,
Innocent ‘2 baba’ Idibia has been in the news over the years for his numerous involvements with his kids and baby mamas, but he has managed to advance his career whatever inspite the odds.
In 2015, the pop star celebrated his 40th birthday in style and had pretty much the entire Nigerian entertainment industry over at his gig, a true reflection of his successes in Africa’s music space.
The story of ‘2 Baba’, now often referred to as one of Africa’s most successful musician in recent years, began in the year 2000 when the group Plantashun Boiz dropped the album “Body and Soul” a pop project with heavy R and B and reggae influences among other genres.
The album was well received by Nigerian and non-Nigerian audiences with the  hit songs ‘Don’t You Know,’ ‘Knock Me Off’, You and 1, ‘If Life and Eememma”, to name a few. The group was young, brilliant and completely in tune with the pop culture of the early 2000s, but one thing was unmistakable; 2 Face, now referred to as 2 Baba, was the ‘goose with the golden egg’.
In 2004, following the group splitting, Innocent ‘2 Baba’ Idibia crossed over from Dove Records and pitched his tent with Kennis Music under the leadership of the entertainment gurus, Kenny Ogungbe and Dayo Adeneye which led to the album Face 2 Face.
The partnership opened a whole new vista for the singer and the Nigerian music industry, crossing our sounds into international stages and markets, bringing about multi-million naira endorsement deals, and resulted in the decade-defining ‘African Queen’-a song so good it made its way into Hollywood. 2 Baba went on to deliver’ magic’ in his following albums, ‘Grass to Grace’ Unstoppable, ‘Away and Beyond and ‘The Ascension’.
But like most successful men (from Solomon to Samson, Fela Anikulapo-Kuti and then Mohammed Ali) Idibia has his limitations when it comes to women. It is a major part of his acclaim till date, the fact that he’s had several romantic relationships as well as fathered kids with different women had brought about several damaging controversies that tended to derail his focused career but 2 Baba still holds sway in the Nigerian music clan and beyond.

What Hope For Our Future Leaders?

How Banned Nollywood Stars Bounced Back