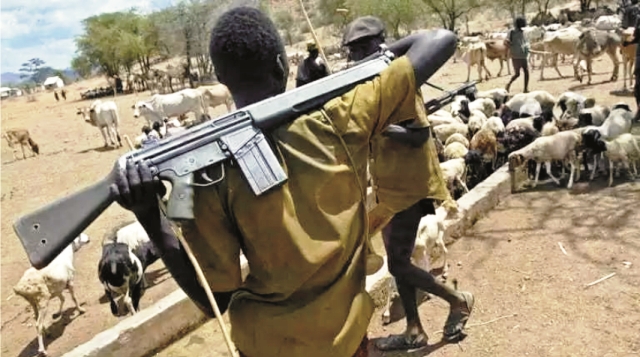 Relatives and sympathisers could not hold back their tears, as the remains of victims of the herdsmen attack ýon Nimbo community, Uzo-Uwani Council Area of Enugu State were buried en mass in the locality recently.
It would be recalled that community, was  attacked in the early hours of Monday, April 25, 2016, by heavily armed men suspected to be Fulani herdsmen, who killed several people, as well as destroyed buildings and other properties valued several millions.
In his speech at the event, Enugu State governor, Ifeanyi Ugwuanyi, who led the State Government’s delegation to the mass burial, said the incident “will ever remain a dark, sad and solemn day in the memory of the people of Enugu State and indeed Nigerians at large.”
He recalled that “It was on that day that our brothers and sisters, whose remains are lying here before us, were ambushed and murdered in cold blood and in their own land.
“Having done all that was needful, including attending to the injured and the displaced, we have assembled here, in tears and in grief, to bury the dead and bid their innocent souls a final farewell.
“Though our emotions cannot restore them to life, we find solace in the fact that the whole world had stood by us and offered us sympathy and solidarity, ever since the incident took their lives, occurred.
“We make bold to declare that their deaths can never be in vain and we pledge to do all that is within our legitimate means, to give them justice.
“Like the martyrs they have become, the spilling of their innocent blood is already saving souls as it has aroused in our people and indeed the whole nation, a burning impulse to do all that is necessary to prevent the future occurrence of similar incidents anywhere in the country. “
“Shortly after the attack, we had called for fasting and prayers and we must declare that the God of Abraham, God of Isaac, God of Jacob, and awesome God of David, has not failed us but has continued to show us His mercies.
“For, even as we await the outcome of the judicial panel of Inquiry that we have constituted to unravel the circumstances surrounding the incident, we received news that five people, who are suspected to have participated in the attack, had been arrested by the police and paraded before the whole world.
“We use this occasion therefore to once again, express our gratitude to the generality of Nigerians who put aside religious, ethnic and political differences, to offer us their hands of support and sympathy after the killings.
The funeral  service which took place at St. Mary’s Catholic Church Nimbo, was attended by Governor Ugwuanyi, former Anmabra state, Governor, Mr. Peter Obi, and sympathiser from different part of the county.