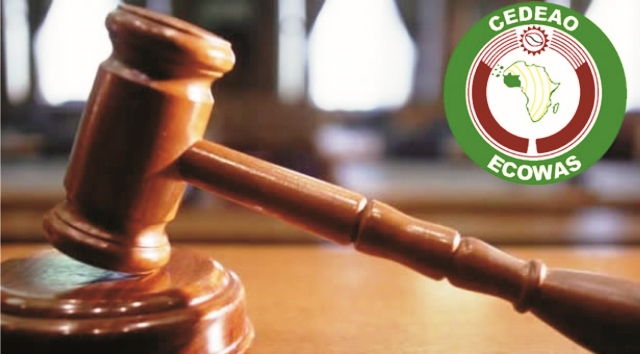 The ECOWAS Community Court of Justice, yesterday, began hearing in the suit filed by some Niger Deltans against the Federal Government, over the allocation and ownership of oil blocs in the region.
The plaintiffs in the landmark case include Mr. Nosa Ehanire-Osaghae, Mr. Jonah Gbemre, Mr. Aiko Obobaifo and Mr. Daniel Ikponmwosa, who sued on behalf of the Niger Delta people while the Defendant is the Federal Government, representing the Federal Republic of Nigeria.
The plaintiffs, represented by their counsel, Barrister Sophia Okoedion, in the suit No: ECW/CCJ/APP/20/15, notified the general public, interested parties as well as oil and gas stakeholders  “on the commencement of hearings after pleadings have been concluded by learned counsels on both sides of the Plaintiffs and Defendant since the suit was instituted just over a year ago.”
Okoedion said that the expectation of the plaintiffs is that the defendant takes plea on the reliefs sought to enable the court to hear witnesses on both sides, adding that the plaintiffs were set to go on with the matter until the determination of the case.
He hoped that “as a noteworthy International court for the common man in West Africa, the ECOWAS Court will at the end of this landmark case, grant the orders we sought in our prayers.”
The Tide reports that the plaintiffs are arguing: “That the Federal Republic of Nigeria has violated the fundamental human rights of Niger Deltans by depriving them of their God-given oil blocs vis-à-vis natural resources, which they allocated to foreign oil companies and non-indigenes from other parts of the country at their own expense and impoverishment.
“That the Federal Republic of Nigeria has violated the fundamental human rights of Niger Deltans to life and a healthy environment by the hazardous flaring of gas in their host communities unabated for the last 30 years, which has resulted in many health casualties, fatalities and untimely deaths without adequate reliefs and compensations.
“That the Federal Republic of Nigeria should put a stop to all acquiring, renewal, award, allocation, transfer, prospecting, buying and selling of oil blocs and their assets until the hearing and determination of the substantive matter.
“That the Federal Republic of Nigeria should re-allocate the ownership of all onshore and offshore oil blocs in the Niger Delta region back to the indigenous oil communities forthwith in accordance with its United Nations and African Union treaty obligations and statutory international law.
“That the Federal Republic of Nigeria should immediately pay remedial environmental damages to the United Nations Environmental Programme (UNEP) in order for them to speedily facilitate the total remediation of the oil polluted farmlands and fishing waters in Niger Delta region to the tune of $30billion, for the excess of five million barrels of spilled crude oil in the Niger Delta region and for the hazardous gas flaring over the last 50 years of oil exploration and exploitation in the Niger Delta.
“That the Federal Republic of Nigeria, should not impede and mitigate but rather assist and facilitate an enabling environment for the people of Niger Delta to conduct a peaceful and democratic Referendum to exercise their inalienable right to self-determination as enshrined in the United Nations and African Union treaties, which it ratified and is a signatory in accordance with the statutes of international law”.
The plaintiffs are also seeking “for any other order or further orders that this honourable Court may deem fit to make in the circumstances of this case.”