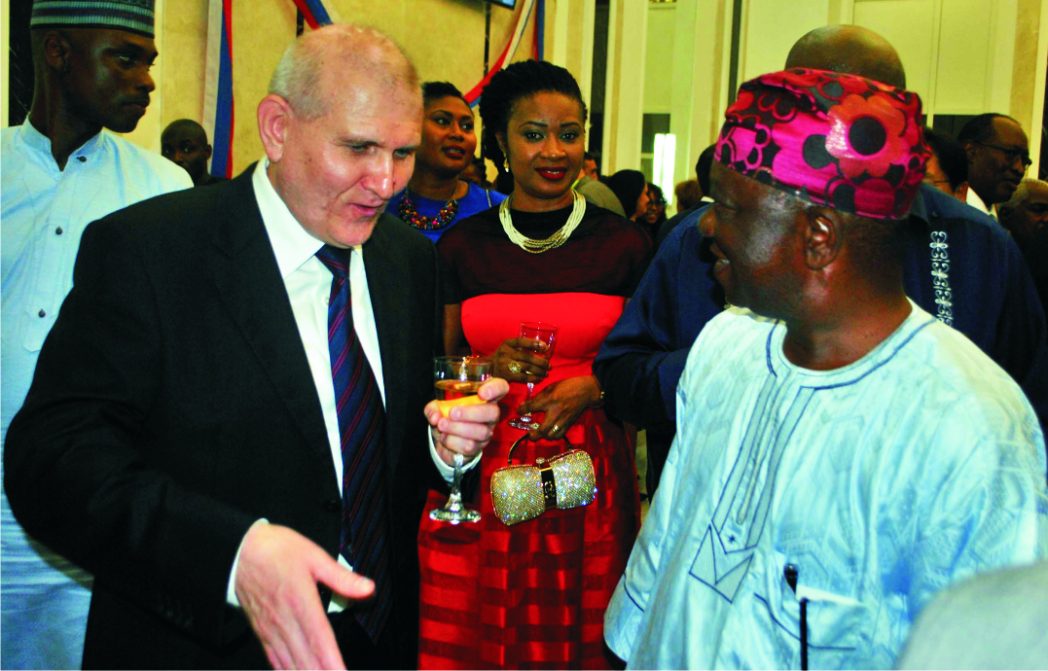 Authorities of Federal University of Agriculture, Makurdi,
have shut down the institution indefinitely following cult activities which led to the death of four students and one security guard.
The institution’s Information Officer, Mr Dzerka Fanafa, said in Makurdi that the decision to close down the school was to prevent further escalation of the crisis.
Fanafa told newsmen that the crisis broke out on Tuesday in some of the hostels built by independent developers and resulted in the death of one student.
He said the university authority swiftly intervened to contain the situation by inviting the security agencies to prevent further hostilities by the students.

Governor Ayodele Fayose of Ekiti State has appealed to
members of the All Nigeria Confederation of Principals of Secondary Schools (ANCOPSS), Ekiti State chapter to call off their two-week old strike.
Fayose, represented by his deputy, Dr Olusola Kolapo, made the appeal at the 10th Congress Meeting of the organisation in Ado-Ekiti.
He charged the principals to show understanding in the face of present economic depression that had critically affected about 29 states of the federation.
Fayose explained that the present economic challenges could not support the payment of three months’ salary being demanded by the workers.
He further explained that the state government was unable to meet the demands of civil servants because the three months allocation from the federation account could no longer pay a month’s salary.

The Society of Women Engineers, Technology and Sci
entists (SWETS) says it plans to educate residents of the Federal Capital Territory on climate change impacts, adaptation and mitigation.
The SWETS Chairperson, Mrs Vera Ogwatu, made this known in an interview with newsmen in Abuja.
According to her, the development is part of the SWETS Africa Community Project, with a view to building resilience in the local communities to climate change.
“Also to raise a younger generation with the right attitude and mind-set to promote environmental sustainability and sustainable development.
“ The project consists of the following aspects: enlightenment programme, introduction of alternatives to fuel wood project and Change the Light Bulb campaign (200 to 250 households),“ she said.

The Jigawa State Government says it has approved the
release of N1 billion to the state’s Agricultural Supply Company as loan to procure farm inputs for farmers.
This is contained in a statement issued in Dutse by Alhaji Bala Ibrahim, the Commissioner for Information, Youth and Sports, and made available to newsmen.
According to the statement, the approval was given during the state executive council meeting which was held recently.
It explained that the loan would enable the company to purchase fertilisers, improved seeds and other farm inputs for the forthcoming farming season.

A Non-Governmental organisation based in Kaduna,
Safety Awareness and Environmental Support Initiative (SAESI), has called on residents of the state to always keep their surroundings clean to enhance healthy environment.
The Controller General, SAESI, Yahaya Mohammed, made the call  in an interview with newsmen in Kaduna.
He also called on residents and business owners in the state to refrain from accumulating waste around their surroundings.
According to him, most of the strange diseases so many people contacted today are because of the dirty environment they live in.
Kwara

The Kwara State House of Assembly has adminis
tered oath of office on Mrs Victoria Afolayan, a newly elected lawmaker representing Oke-Ero Constituency.
Afolayan, an All Progressives Congress (APC) member, was elected at a bye-election conducted by the Independent National Electoral Commission (lNEC) on May 28.
Our correspondent reports that the new female member is the wife of the deceased member, Mr Musa-Moses Afolayan, who died on Jan. 30.
Speaking at her inauguration, the Speaker, Dr Ali Ahmad, said Afolayan had submitted duly certified asset declaration form from the Code of Conduct Bureau and satisfied other requirements of becoming a member of the House.

A 44-year-old businesswoman, Adenike Rodoye, has
lost her 20-year-old marriage to her husband, Durojaiye, because she was always tearing his boxers so as to rape him.
“My wife has turned my boxers to rags as she always tears them to rape me,” he told an Igando Customary Court in Lagos State.
The president of the court, Mr Adegboyega Omilola, after he had listened to the couple, said that he was convinced that they could no longer live together as husband and wife.
Omilola said that he had to dissolve the union after the petitioner had insisted on the divorce.
The president added that several interventions made by him to reconcile them felt on deaf ears.

The Niger State Government has approved N46.2 billion
as 2016 appropriation bill for its 25 area councils.
Alhaji Kabir Abbas, the Commissioner for Local Government and Chieftancy Affairs, disclosed this while briefing newsmen in Minna.
He said “the late presentation of the 2016 local government budget was because of transition of leadership from the past administration to the present.
“The change in leadership of caretaker of the past administration to director of personnel management to caretaker again before the election of local government chairmen.
“When the budget was to be presented, the local government chairmen and the emirate councils requested for time to make contributions, which led to delay up until now.”

Governor Ibikunle Amosun of Ogun has, granted am
nesty to 17 prisoners serving various jail terms in the state.
He also commuted the death sentences passed on four other prisoners to life imprisonment.
This is contained in a statement signed by Juwon Soyinka, his Senior Special Assistant on Media and made available to newsmen in Abeokuta.
He said the gesture was part of activities marking the 2016 Democracy Day and June 12 remembrance anniversaries in the state.
According to the him, the governor’s gesture is in line with the power conferred on him by the Constitution of the Federal Republic of Nigeria 1999, as amended.

Two  men, who allegedly stole a dog belonging to a
church, were arrainged before an Osogbo Magistrates’ Court.
The accused  Oguntoro Segun, 22, and Ayinla Seyi, 27 are facing charges of theft and conspiracy.
According to the prosecutor, Insp. Fagboyinbo Abiodun, the accused committed the offences on June 4 at about 8.30 p.m. at United Missionary Church of Africa’s premises behind Vision Oil, Dada Estate, Osogbo.
Abiodun said the accused sneaked into the church’s premises, tricked the dog belonging to a man, Ajilore Temidayo and bolted with it.

The Chairman, Sabon-Birni Local Government in Sokoto
State, Alhaji Idris Gobir, promised to provide farming inputs at government-controlled rates for farmers in the area.
Gobir told newsmen in Sokoto that providing farming inputs was part of the council’s efforts to encourage farmers in the area to produce assorted food crops.
He said the farming inputs would be provided at the council’s 11 wards to enable farmers have direct access to them.
The chairman said the local government administration would encourage youths and women to participate massively in all-year-round farming.

Zamfara
The Defence Headquarters Committee on Persistent
Farmers/Herdsmen Clashes in the country is currently in Zamfara as part of its fact-finding tour to affected states.
Our correspondent reports that the Committee arrived in Gusau, the Zamfara capital on Tuesday for a two-day visit, where it met with the state’s  acting Governor, Malam Ibrahim Wakkala.