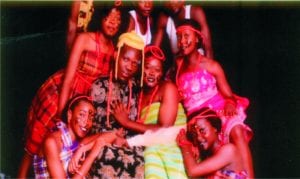 All is now set for the maiden
edition of the Join Christian Campus Fellowship (JCCF), Rivers State University of Science and Technology (RSUST), Port Harcourt Drama Clash as over seven threatre groups are expected to participate at the event.
In an interview with the Tide Entertainment, the drama coordinator, Mr Christopher Owubokiri disclosed that the purpose of the drama fiesta is to showcase the talents of up and coming stars particularly in the areas of drama, acting and comedy as well as to win souls for Christ.
He said at the end of the event scheduled for June 10, 2016 at Chapel of Redemption, RSUST campus, Port Harcourt, prestigious award would be given to outstanding groups, best group organizer, best red carpet award and other consolation prizes as a source of encouraging them towards the attainment of greater heights in their chosen career.
The coordinator who is also a level 300 engineering student of the university noted that there are hidden talents amongst the students that have been ignored over the years, so the event would help to expose them to the outside would where they would be recognized and appreciated for their efforts in promoting Threatre Arts, not only in the state, but the Nigerian nation.
Mr Owubokiri explained that the drama clash touches on both western and indigenous cultures, while the drama would highlight fiction and non fiction, a mixture of epic, contemporary, traditional and comedy. According to him, the participating groups are Arise and Shine Threatre, the Royal Priesthood, Unique Threatre, Jurisic Threatre and Redemption Crew.
He also explained that apart from the drama presentation, there would be acting and comedy events featuring popular humour mongers such as Emperor, Mc Noble, Bethram among others as well as side attractions.
Also speaking on the event, a level 300 Law students of the university and leader of one of the participating groups, Mr Iyalla Obiesula said the historic event would witness drama at its best as participants are working very hard not only to win awards, but to ensure the success of the competition.
The Law student noted that acting is his first love and childhood dream and he has the potential and what it takes to be a good actor, so being a Law student does not change anything; that is why he is putting in his best to succeed despite prevailing bottlenecks in the industry.
He observed that the upcoming stars are not carried along by the older and established stars, while the upcoming stars when they achieve their dream of becoming stars, forget their roots. He noted that the attitude is a disservice to the Threatre Arts profession in the state and it must change for the better for the industry to attain higher levels.
The organisers of the event called on government and the private sector to partner with them in the areas of financial support and logistics. They enjoined them to come to their aid so as to make the event an annual experience for the students on campus and for the entertainment clan as a whole.