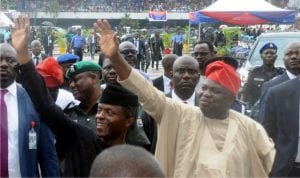 Vice President, Yemi Osinbajo (left) and Governor Akinwunmi Ambode of Lagos State (right), acknowledging cheers from the crowd on arrival, at Tafawa Balewa Square, venue for the inauguration of some security equipment, during the working visit of the Vice President to Lagos State as representative of President Muhammadu Buhari on Monday.

The Victims Support Fund (VSF) says it has so far donated
millions of naira to 16 hospitals across the North East Zone for the treatment of Boko Haram insurgency victims.
The Vice-Chairman of the Fund, Alhaji Tijjani Tumsa, stated this while speaking with newsmen in Maiduguri.
Tumsa said that the VSF had also signed a Memorandum of Understanding (MoU) with the benefiting hospitals to ensure that the money was put to proper use.
“A total of 16 hospitals have so far benefited from our cash donation toward facilitating free treatment for victims of terrorism across the North East Zone.
“It is imperative to note that we also signed an MoU with the beneficiaries before presenting the donation, “ he said.
Tumsa explained that the objective was to ensure judicious utilisation of the fund.

Governor Ayo Fayose of Ekiti State has urged the people
of Oke-Ako to remain calm as security agents try to fish out those who killed two persons in the community recently.
This is contained in a statement by the governor’s Special Assistant on Public Communication, Mr Lere Olayinka.
The statement condemned the attack by suspected herdsmen on residents of Oke Ako town in Ikole Local Government Area of the State.
“Fayose described the attack which claimed two lives as the height of callousness on the part of the cattle rearers.
“He warned the perpetrators to desist from such heinous crime as he would not guarantee whether there could be reprisal attacks if repeated on the town or elsewhere.’’
It added that the agents of the devil must be fished out and punished accordingly.

The Chief of Naval Staff (CNS), Vice Admiral Ibok Ibas,
said the Nigerian Navy had in its 60 years of existence developed the capacity to address Nigeria’s maritime crimes and related threats.
Ibas stated this at the interdenominational church service for Nigerian Navy’s Diamond Jubilee in Abuja.
The CNS said the navy had developed capacity both in platforms and the requisite expertise to secure the nation’s oil infrastructure and contain piracy in Nigeria’s maritime territory.
“Over the years, commendable successes have been made by the Nigerian Navy to build its capacity to discharge its duties as enshrined in the laws.
“These efforts have made the navy to be less-dependent on foreign sources for partnership as reflected in the modest achievement of local construction of boats or seaward defence platforms.

The Kano State Pilgrims Welfare Board has directed all
intending pilgrims to 2016 Hajj to Saudi Arabia to go for mandatory medical test.
The hajj will commence on May 25.
The Public Relations Officer of the board, Alhaji Nuhu Badamasi, gave the directive in an interview with newsmen in Kano recently.
Badamasi said the medical test was necessary because no intending pilgrim would be allowed to travel to the Holy land without knowing his or her health status.
According to him, the mandatory medical test is in compliance with the directive of the National Hajj Commission of Nigeria (NAHCON).

Area Court Judge Mr Timothy Salihu,  and Alhaji Aliyu
Okeme, retired Chief Inspector of Area Courts in Kogi State, kidnapped on May 19, have regained their freedom.
Our correspondent, recalls that they were abducted at gun-point on Idah-Lokoja road in the Eastern flank of the state on their way to Idah.
The Commissioner of Police in Kogi, Mr Yakubu Usman, who confirmed their release, said they were found between Itobe and Ajegwu on Itobe-Anyigba road.
It could not confirmed if their families paid ransom for their release as the kidnappers had demanded one million naira.
Kwara

The Chairman of Kaiama Local Government Area of
Kwara State, Alhaji Alhassan Bagudu, has called for improved funding of local government councils to ensure infrastructural development at the grassroots.
He made the call in llorin while speaking with newsmen recently.
Bagudu noted that the challenges confronting local councils included lack of portable water and other necessities of life.
Bagudu said improved funding of the councils would bring rapid social economic development to the grassroots.
The measure, he said, would also check rural urban drift and create employment opportunities.
He noted that lack of funds had seriously affected development in local government areas.

A septuagenarian, Elder Taiwo Shoyode, has advised
the Federal Government to adopt the socio-economic policies that boosted the economy of the defunct Western Region in resolving the country’s economic quagmire.
Shoyode, father in-law to Vice-President Yemi Oshinbajo, gave the advice in an interview with newsmen at a free health progarmme, sponsored by a philanthropist, Dawodu Olatunji.
The programme, “Health is Wealth’’, is a free malaria test and drugs outreach, held at Solomon Hall, Mushin, Lagos recently.
Shoyode urged the new generation politicians to go back and study the socio-economic agenda of the then Western Region to tackle the issues of economic downturn.
He said the laudable programmes embarked upon and implemented well by the Obafemi Awolowo-led western region remained the best economic policy that might address the present day realities.

The Nassarawa State Government says the report of the
recent Bank Verification Number (BVN) exercise it conducted will expose workers receiving double salaries.
The Nasarawa State Accountant General, Alhaji Mohammed Musa, said this in an interview with newsmen in Lafia.
He said the report of the exercise was in consonance with the state government’s resolve to rid the civil service of corrupt practices and ensure proper accountability.
“We embarked on this exercise to see how we can further reduce some of these leakages and corruption in the system,” he said.
According to him, civil servants caught to be enjoying multiple salaries will be made to face the wrath of the law.
Ogun

The Ogun State Muslim Pilgrims Welfare Board, has called
on intending pilgrims to augment their 2016 interim Hajj fare from the initial sum of N800,000 to N1.180 million.
The Executive Secretary of the board, Alhaji Sefiu Rasheed, made the call on Saturday while briefing news men in Abeokuta.
Rasheed said this was to enable the board to remit the required funds to the National Hajj Commission of Nigeria (NAHCON), Abuja, before the deadline.
According to him, the board has resolved to fix the fare at N1.180 million tentatively, pending the Federal Government’s final decision on the concessionary exchange rate.

Four students of the Federal University of Technology,
Akure, died in a road accident on the Akure-Ilesha Expressway in Ifedore Local Government Area of Ondo State.
The spokesman of the Police Command in Ondo State, Mr Femi Joseph, confirmed the incident and said that 11 others sustained various degrees of injuries.
Our correspondent reports that the students were returning from Ibadan after attending a religious programme.
Joseph further confirmed that the remains of the students were deposited at the Ondo State Specialist Hospital, Akure, where those injured were hospitalised.
No fewer than 15 students were in the Hiace bus when the accident happened.

Assistant Director, Cocoa Research Institute of Nigeria
(CRIN), Ibadan, Dr Abiodun Adedeji, has urged the Federal Government to produce defined policies on cocoa production and marketing.
Adedeji made the call in an interview with newsmen in Ibadan.
He said it was necessary for the government to have policies on cocoa farming with appropriate institutional framework to boost its production.
The Plant Pathologist said such policies should be consistent and that which could not be affected by change of government.
“There should be a well resourced regulatory body with specified functions to promote cocoa sector.’’

Governor Simon Lalong of Plateau State, has decried the
abuse of Local Government Joint Account by some governors, saying he does not interfere with funds meant for local governments in the state.
Lalong stated this at the News Agency of Nigeria (NAN) Forum in Abuja.
He said that even though he did not support the local government autonomy, he abhorred a situation where a state governor would exercise undue interference in the joint account.
“ I heard stories that in some states what they do is that when the money comes, they collapse it into one account and decide what goes into each local government.
“I fought against it as a Speaker, I cannot be part of it; so when the money comes, it is meant for the local government.