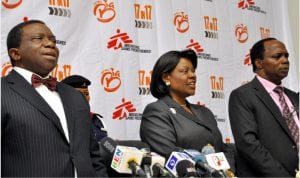 The National Chairman, Peoples Democratic Party (PDP), Senator  Ali Modu Sheriff has apologised to aggrieved stakeholders of the party over statements credited to him by his personal aides and associates.
Sheriff, who gave the apology at a media briefing in Jalingo yesterday, said “as a well cultured and astute politician, I would never make any comment that would ridicule the party.”
He added that it was not in his character to join issues with highly respected elders of the party, noting that he never authorised any of his aides or political associates to react to issues raised by aggrieved elders of the party.
Sheriff said that the aggrieved members of the party reserved the right to complain about issues affecting the party which they considered inimical to the progress of the PDP.
He, therefore, urged any aggrieved member to bury the hatchet and join hands with the present leadership to rebuild the party and restore the confidence of Nigerians in it.
He also noted that the PDP as the main opposition party in the country could not afford to have a divided house, and appealed to members to work for the unity of the party at all times.
He explained that the present leadership of the party was poised to lend a listening ear to all shades of opinions with a view to strengthening it to face the challenges ahead.
He maintained that the battle for 2019 general elections had started in earnest, adding that the party could not afford to remain divided if the desired goal was to be achieved.
He said “under our leadership and the support and encouragement of stakeholders and supporters, PDP will definitely bounce back in 2019.”
Meanwhile, a chieftain of Peoples Democratic Party (PDP), Comrade Abba Moro, has made a passionate appeal to the leaders of the party to embrace dialogue and come together on a roundtable to resolve the current crisis rocking the party.
Moro, who was the Minister of Interior in the immediate past administration of former President Goodluck Ebele Jonathan, made the appeal to the PDP leaders and stakeholders in a statement he issued in Abuja.
According to the ex-Minister, this is the time for the PDP members to be united more than ever before, instead of engaging in unnecessary battles that could cause serious damage to the fortunes of the party.
“Frankly speaking, we do not need any form of disunity and infighting in our great party at the moment. We should not in any way be seen at this point to be divided in the party.
We must remember that a house divided against itself can never stand. Any attempt to allow divisions and factions will certainly spell doom for the PDP, which ordinarily should be the voice of the people now and the alternative platform for them come 2019, especially as the current administration of All Progressives Congress, APC, has clearly disappointed the citizens in the manner and way they are carrying on with governance.
I am, therefore, appealing passionately to the leaders of our great party (party executives on one hand and the elders on the other hand) to sheathe their swords of war and resort to dialogue which, for me, is the best option for an amicable resolution of the contending issues. Staying united is the only way we can be truly formidable in playing the strong opposition role expected of us by the Nigerian people who are suffering untold hardship under the APC regime,” the former Minister averred.
He added: “We should not forget so soon how internal wrangling and divisions in the PDP that were not properly managed then made some of our prominent members to break up from the party, a development that can be said to have been responsible for our loss in the last general election, not essentially because we did not perform as a party in government.
“The people of our dear country, Nigeria are waiting for us to return to power in 2019 because they have seen the difference in what we offered them and what the present APC government is offering them now. And so, in the interest of our party and the entire Nigerians, we must not be seen to be on bad terms for whatever reasons. We must put our house in order and forge ahead harmoniously.”