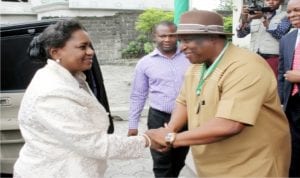 The Rivers State
Government has uncovered massive fraud in its monthly wage bill through the on-going biometric data capture for civil servants in the state.
According to the state Governor, Chief Nyesom Wike, over 1,000 workers collect two different salaries monthly in various ministries of the state.
Wike while playing host to members of the Governing Council of Kenule Saro-Wiwa Polytechnic, Bori, at Government House, Port Harcourt, decried a situation where a handful of corrupt officials siphon half of the monthly wage bill into their pockets.
He, therefore, declared that salaries will only be paid to civil servants in the state who have concluded their biometric capture data.
While wondering why government will be paying over 50,000 civil servants monthly, and few people will be collecting half of the wage bill, Wike made it clear that he will stop the trend, as according to him, he has the political will to do so.
“I don’t know how we can have 50 something thousand civil servants we are paying salaries. As at yesterday, from the record I saw, we have gotten over 1,000 people who collect double salaries. The same persons, two ministries, taking two salaries, you can’t believe it.
“They say we have 50 something thousand; now we have gone up to 4,000, people are not coming to do biometrics, they must come. If you do not do your biometrics, no salary. If you like put it on the pages of newspapers, ‘workers have not been paid salaries’, I am not owing you. Go and do your biometrics.
“There are cabals in the civil service making money. I have the political will, and I will stop the trend whereby government will be paying over N5billion as salaries, and some people will be taking half of the money,” Wike added.
While noting the dwindling federal allocation to the state in view of the decline in oil prices and the state wage bill, Wike urged management of the polytechnic to strive to improve on their internally generated revenue.
“Source for your own revenue. No university or institution can survive by solely depending on government. It is not possible. Look at the oil price. As at last month, we got N3.5billion, which is like $10million and our salary is over N5billion. If we do not drive our IGR up, we won’t survive, and that is why we are seriously trying to reduce our wage bill,” he said.
Wike, said that the polytechnic was set up to produce middle level technical manpower to tackle the needs of the state.
as well as equip the workshops and laboratories to meet the desired standard of the institution.
He assured them of government’s desire to assist the institution in order to meet the required standard for accreditation of courses run in the institution.
Earlier, the Chairman, Governing Council of the Kenule Beeson Saro-Wiwa Polytechnic, Bori, Chief Adokiye Amiesimaka, said the priority of the council was to make the institution the best in the country.
He lauded the governor for his developmental strides, and solicited for government support to enable it tackle some challenges faced by the institution.

School Head Lauds The Tide For Blazing The Trail