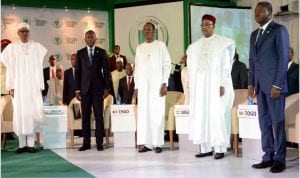 The Rivers State chapter of the Peoples Democratic Party, (PDP), says it is aware of the surreptitious moves by Messrs Barry Mpigi and Magnus Abe, both candidates of the All Progressives Congress, (APC), for Oyigbo, Eleme, Tai Federal Constituency and Rivers South/East Senatorial District, respectively, in the March 19 rerun elections to influence and stampede the Independent National Electoral Commission, (INEC), to release results for the four Ogoni local government council areas where the elections did not hold on account of their suspension  by the INEC, even before the commencement of accreditation of voters.
A statement signed by the State PDP Chairman, Bro Felix Obuah stated that though it was public knowledge that the re-run elections in Tai, Khana, Eleme, Gokana and Andoni Local Government Areas were suspended by the INEC due to reported cases of fake result sheets and hijacking of election materials, the duo of Mpigi and Abe have been hobnobbing with Mrs Amina Zakari of the INEC to dare the unexpected by declaring election results for those areas where election was suspended.
“They are particularly working on declaring election results in Tai Local Government Area, with the help of Mrs Amina Zakari, in favour of Magnus Abe and Barry Mpigi, All Progressives Congress, (APC), candidates”, the PDP alleged.
Describing the move as dangerous, the state PDP chairman, warned that contemplating such sinister plot was enough provocation let alone executing it.
He appealed to INEC not to succumb to the snare because Rivers people will not and cannot tolerate such a letdown and, or affront.
The PDP, the chairman noted, as a grassroots party,  is not afraid of any rerun election anywhere, any day in the state, and only expects INEC to do the needful, by releasing the results for only those places the elections were conclusive, and not areas where elections were suspended, and also conduct fresh re-run elections in the areas they were either inconclusive or outrightly cancelled or suspended as in Ogoni and Andoni areas.
He queried the rationale for the regular visits to the Abuja office of the INEC by Magnus Abe and Barry Mpigi as though they are staff of the commission, describing the development as worrisome.

Beyond Cameron’s Apology …Another Look At Anti-Graft War