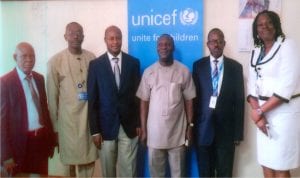 The Rivers State Governor, Chief Nyesom Wike, has appointed Bethel Iheanyichuku as the new Commissioner for Works with immediate effect. This followed the sack of Engr Kevin Wachukwu.
Swearing-in the new commissioner, Wike took a swipe at Wachukwu, accusing him of laxity and negligence of duty.
The governor explained that his administration will not tolerate complacency as he was determined to develop Rivers State, in spite of all the odds.
According to him, “I have a covenant with the people of Rivers state to develop this state. And anybody that is going to work with me must work at my speed and not at his or her own speed.
“Nobody should come and drag me back like the former commissioner. If you are handling any project, you should be the one to brief me, and not me briefing you,” Wike said.
The governor further charged the new works commissioner to always be on the road supervising projects and reporting progress of work at all times.
He said: “The former works commissioner is intelligent, but he could not meet up with the pace of work at the ministry. Take your work very seriously. There should be no compromise.
“The day you misinform me on the status of projects, will be the day you will be sacked. The day you begin to use your office to form rings, will be the day you will lose out”.
The Tide reports that the Rivers State House of Assembly had earlier screened and confirmed Iheanyichuku as a commissioner-designate.
His screening followed a request by the state governor.
The Tide reports that the new commissioner for works hails from Ogbogoro in the Akpor area of Obio-Akpor Local Government Area of Rivers State.
In a separate development, Governor Wike also sworn-in 17 Local Government Caretaker Committee chairmen with the task to liaise with security agencies with a view to improving security situation in their areas.
The state governor also tasked them to pay salaries of staffers before anything else.
The Tide gathered that in addition o the 17 earlier secreened by the State House of Assembly more  would be sworn in later after screening.
He said under no circumstance should caretaker chairmen deduct their security votes before paying salaries.
Wike further directed the caretaker council chairmen to ensure they improved sanitation in their respective areas.
He particularly charged the chairmen of Port Harcourt, Obio/Akpor, Eleme, and Ikwerre local government areas to improve on environmental sanitation.
The Tide recalls that barely one month after the dissolution of the 23 local government caretaker committees by the Rivers State Governor, Chief Nyesom Wike, the state House of Assembly, had last Monday, unanimously confirmed the appointment of caretaker committee chairmen for 17 local governments of the state.
Their confirmation follows the submission of the request by the state governor to the Assembly to confirm the caretaker committee chairmen.
The Speaker of the House, Mr Adams Dabotorudima, has said that the confirmation was imperative for administrative efficiency in the third tier of government.
Adams said that the local government administration was necessary for the development of the rural communities.
The CTC chairmen are Michael Amadi (Etche), Sunny Ejekwu (PHALGA), Samuel Nwanosike (Ikwerre), Oye Igenewari (Abua/Odual), Britain Ewor (Ahoada East), Rowland Sekibo (Akuku Toru), Kangban Offings (Andoni), Charles Jumbo (Bonny), Johnson Wogu (Eleme), John Wokoma (Emohua), and Prince Collins Onunwo (Obio/Akpor).
The rest are Prince Isaac Emerunu (Ogba/Egbema/Ndoni), Titus Wakama (Ogu/Bolo), Bibigoka Jackbara (Okrika), Uchenna Akowa (Oyigbo), Stanley Eze Wuju (Omuma), and Parkins Kelu (Tai).