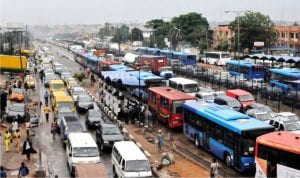 Traffic at Ojota following a down pour in Lagos, recently.

Some motorists have
commended the Rivers State Road Maintenance and Rehabilitation Agency for the execution of its zero pot hole assignment in Port Harcourt and its environs.
The motorists who made the commendation in an interview with The Tide correspondent in Port Harcourt said they were impressed so far with the agency for ensuring free flow of traffic and loss of man-hour.
They described the present administration as “road-users-friendly government”, especially the motorists, stressing that with the on-going road rehabilitation and maintenance they no longer make daily visits to mechanic workshops to service their vehicles.
According to them, rehabilitation of their roads had rekindled their hope in Governor Nyesom Wike’s government, and enjoined him not to rest on his oars.
They maintained that the disappearance of pot-holes in Port Harcourt and its environs is truly a new vision for the state, stressing that the state had bounced back to its Garden City status.
Mr Titus Orubipi, who expressed delight with the state road maintenance and rehabilitation agency said especially Diobu and its suburbs have witnessed great changes and free flow of traffic, commended the Governor Nyesom Wike, for the vision, which he further said is impacting positively on the people in the state.
Another motorists, Caroline Nwankwo-Obi also noted with joy the good road networks in the state and opined that with the development, traffic gridlocks are reduced to the bearest minimum.
Nwankwo-Obi lauded Governor Wike for his developmental efforts, especially his zero pot-hole agenda through the road maintenance and rehabilitation agency and enjoined them not to relent.
In his own reaction, Comrade Johnson Asawo, said he is well impressed with the road rehabilitation work in the state and commended the chairman of the agency, Chief Okey Okah, for carrying out a thorough job.
He also lauded the Governor, for his infrastructural development that had given the state a face-lift, stressing that, “the state is fast becoming an investors haven”.
Also, Mr Enefiok Akpan said he is now experiencing a new Rivers State with various road networks and rehabilitation, saying that the projects would boost economic activities in the state, and enjoined the authorities to also remember the street lights in order to ensure safety on the roads at night.
It would be recalled that the Chairman of the state Road Maintenance and Rehabilitation Agency, Chief Okey Okay, recently disclosed that the agency had so far rehabilitated 13 major roads cutting across the state.