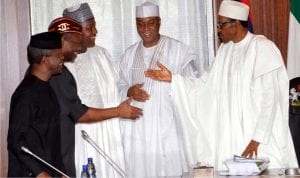 Minister of Power, Works and Housing, Mr. Babatunde Fashola says that power generation is picking up after last week’s vandalism of power stations in the Niger Delta.
He announced this while addressing newsmen after inspecting facilities at Shiroro Hydro Power Station (SHPS) in Shiroro Local Government Area of Niger State, yesterday.
Fashola said there was a slight increase of three megawatts from the previous week drop to 2005 megawatts in the country.
The minister, however, said that measures were being taken to ensure stability in the supply, adding that generating companies should live up to expectations.
“I don’t want us to focus on mega watt; for me they are just bus stops; we will only announce them as milestone that we have reached the bus stops, but we know our journey is much more longer.
“I have spoken on our incremental power, to steady power, to uninterrupted power and that is the journey.
“We are edging up to 2008; we lost power due to the explosion that took place last week. We were down to about 2005; presently we are up to 2008.
“We are working hard to get the incremental power to that level and beyond that to where we have been in February of 5,704 and beyond that to where we have never being,” he said.
Fashola urged the generating companies to continue to keep to the concession agreement by improving on the condition of their asset.
“For me it is good news that somebody is focusing on maintenance. The Shiroro station has four generating plants and three of them have been refurbished.
“So for the next eight years, nothing will go wrong in the time of turbines. When it was being managed by Federal Government, this capacity we have now was not there.
“Power generation companies need regular and periodic maintenance. During my visit to Jebba dam, I learned no maintenance has been done for over 30 years.
“The Public Private Partnership (PPP) is a step forward. If this was done in the last 10 years instead of keeping money under the bed, we will not be faced with this insufficient power supply,” he said.
Fashola commended the SHPS for its effort to increase energy generation by 300MW through the use of solar plant.
The minister urged the distribution companies and consumers to keep to their obligations, adding that government would continue to give it support for effective service delivery.
“Government also have obligation to ensure that all it ministries and departments owing must pay their dues. We are working hard to pay what we owe just as consumers must pay.
“The transmission company must pay the generation company and the generation must also pay the gas company so that we can have stability in the system”, he added.