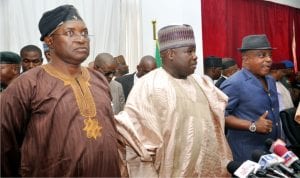 Exasperated by what he
described as vestiges of Westernisation in news reporting and coverage by the Nigerian Press, the Chairman of People Democratic Party (PDP) in Rivers State, Bro Felix Obuah has chided the media for their failure to highlight the remarkable achievement recorded under the present democratic dispensation.
In a statement to mark this year’s World Press Freedom Day in Port Harcourt, Bro Obuah noted  that though the Nigerian press has performed impressively well over the years, it has been reluctant in highlighting the development projects and landmark achievements as in the case in Rivers State under Governor Nyesom Ezenwo Wike.
He regretted that rather than dwell on the dividends of democracy being enjoyed by Rivers people the Nigerian Press “prefer to promote those things that tend to threaten the unity of our people”.
According to Bro Obuah, the massive developmental projects and the near magical turn around of the situation in the state from the partons and precarious  state left behind by immediate past regime under Rotimi Amaechi ought to attract media searchlight for global attention than they have recorded.
He enjoined media practitioners to be “wary of enemies of progress in whatever guise who revel in distracting them from objective and impartial reportage which is the fulcrum of Journalism”.
Recalling the opening of the courts after the unusual clampdown by the Amaechi administration for one full year, the face-lift being given to the judiciary for optimal performance, giving life back to the moribund state legislature, massive infrastructural development across the 23 local government areas of the state, payment of all the back log salary arrears and pensions  owed civil servants by the immediate past administration, positive changes aimed at repositioning institutions of higher education in the state, Youths and Women Empowerment Programmes, Judicial  Commissions of Inquiry to expose incidents of fraud and looting of state treasury, violence before, during and after elections at all levels  and security measures with a view to protecting lives and property of citizens in and around the state by Governor Nyesom Wike’s administration are good topics for editorial analysis and discourse for public enlightenment and not only the Rocket of youth restiveness and sponsored protest by aggrieved politicians”, Bro Obuah stated.
Obuah however advised practicing journalists to reflect on their past mistakes and weaknesses, make amends and come back stronger, forcefully, more reliable and representative of the true happenings in society.