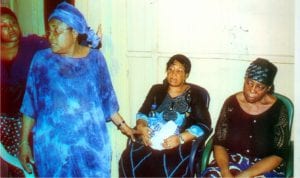 Mrs. Daba .G. Amachree, wife of late Elder Gabriel Amachree with some family members, during a condolence visit of the Rivers State Government to victims of the Rerun National and State House of Assembly elections in ASALGA. Photo: Egberi .A. Sampson

Without mincing
words, the death of a loved one, especially one that leaves a remarkable vacuum in the life of the living, is an experience that calls for sympathy and probably practical gesture that would be aimed at reducing the impact of the loss.
To many, the loss of a breadwinner, places them in an unstable state, that takes them a long time to rediscover themselves and see meaning in life again.
This precisely is the story of many widows who had leaned earnestly on their late spouses. The news of the death of their spouses do  not only throw them into a big shock, it destabilises their stronghold; economically, socially and otherwise.
To these ones, it takes the intervention of philanthropists to make life meaningful again to them.
Only those who know what it means to lose a pillar of one’s life,  know how to manage the remains of the living. Ohiowale Rachael Chukwueroka, popularly known as Ehidiana of Wazobia Radio FM, Port Harcourt, is one among many that had taken a stand to reduce the pains and burdens of widows in our neighbourhood. Her yearly charity gesture, known as “A Day With the Widows”, provides a platform for her to touch the lives of widows and put smiles on their faces so they can see reason to live on and flow along with others.
Apart from Ehidiana, our daily news is replete with names of politicians, philanthropists and some religious outfits who also visit the widows to alleviate their plight.
Yet, amidst these ones with the heart of gold towards humanity, exist others who feed well in the tears of people. Such ones would hardly see any reason to sypathise with the widows and so would stop at nothing in making sure that their pains and sorrows know no end.
They are men and women who would want widows to lose everything not excluding their own lives all because they lost their husbands.
How does it feel to lose one’s status, livelihood or property, all for a loss of husband? Painful! I guess, yet this situation has become the portion of many widows in our society today.
At various times in different localities, cases have been reported about how widows are treated at the demise of their husbands. While some are foced to drink their husband’s corpse’s bath water, others are subjected to sit on bare floor, bare bodied and with their hairs shaven without recourse to the health hazard these actions predispose the victims to.
The sin of these widows cannot be far from the death of their husbands which is often suspected to have been caused by the living widows, but how true is this allegation?
To address this worrisome culture, the United Nations set aside June 23rd every year as “International Widows Day,” to stress that, “no widow should lose her status, livelihood or property at the death of her husband.
Unfortunately, millions of our widows face persistent abuse, discrimination, disinheritance and destitution. As a result of this development, the Federation of Women Lawyers has at various time championed the defense of many widows who had faced one form of torture or the other from their in-law homes but for how long will this last? What about those who cannot reach the women lawyers for assistance and cannot also take their case to the law court for lack of financial and moral support?
Many at times it is hard to believe that a man would lose his spouse, and he is being sympathised and not just that, he attracts genuine sympathy from people, he is assisted to bear the burden and be eased  of his sorrow. This same man can resume his work the next day while the late wife remains unburied and even after burial he is encouraged to remarry in less than one month yet the society does not frown at it. Should that which is good for the geese not be good for the gander?
There is whatsoever no reason for any woman to lose her status, livelihood or property because she has lost her husband.
In as much as the life of the woman does not terminate at the demise of her husband, there is every need for her to be given the enabling environment so as to gather the pieces of her life and live it well. The woman is not a lesser mortal to the man and so, every human right violation on her, stemming from the unjust view of the woman as having a diminishing value must stop.By the message of the United Nations General Secretary, Ban Ki Moon, last year. “We must erase the social stigmatisation and economic deprivation that  widows are faced with eliminate their high risk of sexual abuse and exploitation and remove the barriers to resources and economic opportunities that constrain their future. We must also advance widows equal rights to inheritance, property, land and other assets.
The vision of a life of dignity for all will remain a mirage without a resolve to end all discriminatory attitudes against widows and ensure that widows of all ages enjoy equal human rights, including the right to shape their future and to participate fully in society.

Our Communities Should Empower Women – Manjor