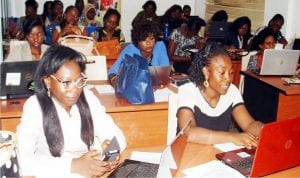 A cross-section of participants at a Digital Marketing Workshop for women organised by Women Technological Empowerment Centre, in Lagos on Wednesday.

The Minister of Informa
tion and Culture, Alhaji Lai Mohammed says Nigeria’s switch over from analogue to digital television is a landmark achievement.
Mohammed said this on in Jos while inaugurating the pilot phase of the Digital Switch Over (DSO) that would start the digitisation process in broadcasting.
“Today, history is being made, both in Nigeria as a country and in the city of Jos. After 12 years, the country began the process.
“What we have dreamt of, imagined, attempted and what even seemed impossible at a stage, is now happening right before our very eyes.
“Nigeria is transiting from analogue to digital broadcasting.
“The journey that started in 2004, when the International Telecommunications Union (ITU) Council adopted Resolution 1185 on transition from analogue to digital terrestrial broadcasting, is finally nearing its destination,”
The minister noted that three events were significant in the history of television in the country.
He recalled that in 1959, the Western Nigeria Broadcasting Corporation WNBC inaugurated the first Television Station in Africa, and in 1976, the first colour Television was switched on in Jos.
Mohammed said 40 years after the colour Television was inaugurated, the country was transiting from analogue to digital in the same Jos.
“This is a monumental event, because with the switch over, we are revolutionising the broadcast landscape and architecture, as well as the local, state and national economy.
“More importantly, we are democratising the right to know, the right to knowledge and the right to be informed.
“This is simply because with what we are doing today, the average Jos person does not need to pay subscription to watch the best news and entertainment from around the world.
“Compared to yesterday when the average Jos person can only watch Television channels at best, he can now watch fifteen (15) Television channels, local and international news as well as local and foreign entertainment,’’ he said.
One other importance of DSO, Mohammed said that through the information service, viewers could also get news about government activities without going on the Internet.
Also while watching a particular channel, they could know the other programmes available on that channel, using the EPG, or Electronic Programme Guide.
“In terms of the economy, all licensed Set Top Box manufacturers have been mandated to establish manufacturing companies in Nigeria to produce the boxes locally, after importing the first set of boxes.
“This will create massive employment and also ensure the transfer of technology for our people.
“Also, due to availability of many channels, there will be an astronomical increase in the need for content, and this will fire the creative ability of our youths,” he said.
The minister said the switch over would also become the much-needed panacea to the menace of piracy dogging the music and movie industries.
He said the musicians and movie producers would be able to release their works directly to the platform, where they could be purchased, thus wrong-footing those who had been pirating their works.
According to him, the transition will trigger a chain of retailers and installers of the Set Top Boxes, with a massive impact on the local economy.
While thanking the Plateau Government for its support, he called on the local and state governments to help by buying the boxes for their people at subsidised rate by the Federal Government.
The Tide source reports that the event was attended by the state Deputy Governor, Prof. Sonni Tyoden, a former deputy governor, Paulen Tallen and major stakeholders in the broadcast industry.

The Federal Government has affirmed that its plan to attain 95 per cent digital literacy by 2030 is  still on course.
Director-General of the National Information Technology Development Agency (NITDA), Kashufu Abdullahi, gave the assurance during the graduation ceremony of 50 children, including 10 Almajiri children at the Engausa Global Tech Hub in Kano recently.
The  Tide’s source learnt that the Engausa Global Tech Hub is an incubation centre, currently working in collaboration with NITDA in Kano.
“These young children have been intensively trained at their early stage, using the Hausa Language in building their skills in digital technology, Computer Networking, Installation of CCTV cameras, Graphic Design, innovative creativity, among others,” he said.
Abdullahi also revealed that the centre in 2021, also trained over 700 young boys who were selected from various rural communities in the state.
“As a result of this intervention, in 2021, we have been able to expand the collaboration and we are going to do more this year to see how we can help the less privileged children to have access to technology.
“One of our mandates is to implement the policy under the National Digital Economy Policy for digital Nigeria to a logical conclusion in achieving the 95 per cent digital literacy by 2030”, he said.
He further noted that the  government cannot do it alone, hence the need to partner with centres like Engausa to achieve the aim.
“We are also looking at how we can assist the children who have participated in this programme to start their own businesses,” he added.
Earlier, the founder of the centre, Mustapha Ringim, confirmed that the centre was out to bridge the productivity gap in young people, especially those who cannot make it to formal schools.
“I realized that there are a lot of things that I can offer to the community concerning breaking some barriers and bridging some gaps which are limiting the productivity of our youth at the grassroots”, he said.
Ringim was of   the view that the Almajiri children and the school-drop outs who cannot continue their studies due to lack of proficiency in the English  Language, among other things was the main target of the centre.
“Language should not be a barrier to achieving one’s dream.There are a lot of developments in countries that are not using the English Language as a medium of learning skills, like European countries where English is not well-spoken, but technology, innovation and creativity are flourishing in the country”, he said.
According to him,   English Language should not be considered as  the only medium of learning skills or  the only medium of prosperity when it comes to knowledge.
English Language, he reasoned, should not deprive someone of practising his or her skills.

IAUE To Invest In ICT Infrastructure

The Acting Vice Chancellor of Ignatius Ajuru University of Education, Pro. Okechuku Onuchuku, has said that the institution will explore opportunities in the growing digital space by investing in Information Technology infrastructure.
This, he said, will reduce the digital divide between the university and the rest of the world.
Onuchukwu, who dropped the hint recently while addressing the school community in his New Year message in Port Harcourt, commended the Rivers State Governor, Chief Nyesom Wike, for his immense investment in the education sector, especially in state-owned universities.
He said IAUE under his watch would forge mutually beneficial institutional linkage programmes with reputable universities and research institutions around the world to internationalise the academic content of the university.
One way to do this, he explained, is to come up with innovative research works that meets global standards and ensure that such works are made globally visible.
“Our academics will be motivated to turn out ground-breaking research works and innovations that would enhance our institutional visibility and social viability.
“To enhance our global visibility ranking and competiveness, it is profoundly important that we upload all our research outcomes on the Internet for our colleagues in other climes to access and cite our works, just as we do theirs in our works.
“In addition, we must upload all undergraduate, and Graduate Projects, Dissertations and Theses online.
“To do so, we must ensure proper supervision of students at all levels and insist that their references are in conformity with current biographical methodologies”, the Acting VC explained.
To enhance this, he urged lecturers who are not conversant with global referencing to promptly enroll on the Google Scholar and ResearchGate platforms in line with global best practice “in this age of knowledge globalisation”.
While commending the level of creativity, innovation, enthusiasm and sacrifices of staff and students since his assumption of office in November, Prof. Onuchuku said more needs to be done in 2022 as the institution seeks to aspire to rank among the best in the country.
“With your support, I am very determined to build a University that would benefit all stakeholders in our affairs. We made important progress last year through some of the milestone pronouncements and policy changes I initiated on assumption of office.
“I am glad to note that these policy changes are already yielding positive dividends to general applause.
“As we begin the New Year, I count on your continued support to enable us pull through the hurdles on our way in grand style. I invite you all to please come on board”, he urged.

The Nigerian Postal Services (NIPOST) has signed a partnership with Egyptian firm, e-Gate Egypt, on digital transformation of logistics and last mile delivery chain services..
Postmaster-General (PMG) of NIPOST, Dr Ismail Adewusi revealed this in Abuja recently when the Chief Executive Officer of e-gate Egypt, Mr. Essam Alsaghir, visited NIPOST headquarters in Abuja to consummate the partnership.
Last mile delivery is  the movement of goods from the warehouse, shelf or transport hub to its final delivery destination or the customer’s door step professionally known as ‘the last mile’.
Adewusi, who said that the partnership would help in addressing infrastructure gaps in the Agency, added that it would also assist in job creation.
According to the PMG, “the digital transformation of the post implies that from end to end, the customer can track the movement of his mails and his parcels.
“I think it is one area that we’ve really lacked some form of competitive edge.
“The signing of this agreement will also assist us in contributing to the vision of President Muhammadu Buhari’s administration of lifting 100 million people out of poverty over the next 10 years”, he explained.
The PMG noted that with the agreement, NIPOST could engage many youths, thereby increasing job opportunities in the country.
While explaining the significance of the agreement,  Alsaghir said digitally transforming NIPOST operations would fundamentally change the way postal services are delivered in Nigeria.
“When the agreement is implemented, the entire mail delivery system will be automated using driver mobile application. Customers can track the movement of their parcels through a mobile app.
“Our partnership with NIPOST will provide our customers with new technology and mobile app for a secure, easy and faster way to reach their clients not only for postal service but other transactions,” Alsaghir said.
He further said the partnership would help to generate money-making opportunities for many Nigerians, particularly young people.
me-generating opportunity, where citizens’ vehicles will be used. Now, every citizen with a vehicle will be a potential Courier Agent for the POS and private business,” he said.
The framework agreement is aimed at allowing Pan African Postal Union (PAPU) and stakeholders to explore and execute business opportunities for registered communication and digital postal services.