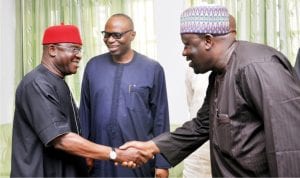 International and local air
lines operating in Nigeria are facing a tough time as the present government policy to limit the use of first class and business class tickets by Ministers, Permanent Secretaries and some heads of parastatals reduces revenues.
This is sequel to government resolve to effect 20 per cent reduction in air travel expenditure, as the figure of N64 billion expended on travels in 2015 by government officials is considered outrageous.
The Minister of Finance, Mrs Kemi Adesoun who disclosed this to select journalists after a special event hosted by the Lagos Business School (LBS) recently stated that government is determined to embark on cost cutting measures that would involve direct bulk purchase of tickets from the airlines, as government plans to re-position the country’s economy through her ministry as the arrow-head.
Adeosun hinted the efficiency unit in the ministry has recorded some giant strides, including reduction of procurement opaqueness within FGN, providing cost savings guidelines to government, saying that additional innovations like online procurement system for travel, basic goods and other services employing vetted suppliers and a clear accounting as well as approval system will be applied.
However, experts in the aviation sector argue that in spite of these innovations and the ones yet to take off, they may affect airlines revenue, especially foreign airlines which charge an average sum of N2 million on their first class section for trips outside the country.
“I noticed that the first class at the Virgin Atlantic, a few days ago were empty, while the business class and the economy class were relatively full, unlike what we had before now, where the first class is usually full”, a frequent traveller on the Lagos-London routes who craved anonymity, told The Tide Aviation Correspondent.
Our source further disclosed the business class of a British Airways flight was likewise virtually empty about three weeks ago, when he travelled on the airline.
British Airways Commercial Manager, Kola Olayinka told The Tide Aviation Correspondent that though the government policy is affecting airlines, especially international airlines, they have to comply with the policy in good faith and see how best to make revenue to cushion the effect.
“Anything that changes the equilibrium of customers will affect us. But this is a government’s decision and we have no choice in the matter. We have to go back to the drawing board and see how else to re-strategise”, Olayinka said.
Chief Operations Officer, Tropical Arctic Logistics Ltd, Femi Adeniji, a helicopter logistics firm told The Tide Aviation Correspondent that government’s policy on reducing travel expenses is a good step, as it will reduce unnecessary expenditure and wastages and will enable the government to raise funds to addressing more pressing issues in the country.
Adeniji, however, explained that if the airlines involved are able to re-strategise properly the effect might just be minimal, “The first class and business class are minimal to the economy class. The business people can still travel first class if they have the money and value the advantages accrued to flying first class”, Adeniji said.
In the same vein, experts in the aviation sector say the current forex policy of government and resulting shortage have caused an unparalled increase in airfares from Nigeria to other countries and the effect may stunt the growth of the industry.