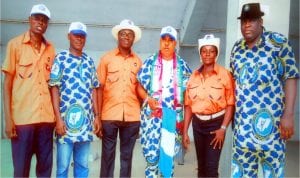 No fewer than 10 unknown
gunmen last weekend kidnapped the pregnant wife of Ubong Assam, the paramount ruler of Esit Eket in Akwa Ibom.
The gunmen also abducted the four children of the traditional ruler.
The Secretary, Traditional Rulers Council, Esit Eket, Chief Asuquo Abia,told newsmen in Esit Eket that the gunmen invaded the palace of the paramount ruler in the wee hours of Saturday morning.
Abia, who is also the Village Head of Afaha Akpenedi, said the gunmen shot sporadically for over five hours from 1.30 a.m. to 6 a.m.
“The gunmen destroyed part of the palace with dynamites and broke into all the rooms and carted away valuables,’’ he said.
He said the gunmen arrived at the palace on Thursday claiming to be policemen from Abuja on an investigation.
Also, a family member, Mr Norbert Assam, said that seven people wounded in the incident were hospitalised in the state.
He said that the paramount ruler’s wife was eight months pregnant when she was kidnapped. Assam also said that the gunmen escaped the scene with their victims in the paramount ruler’s Jeep.
“They came in two vehicles, a white Hilux van and a sports utility vehicle; they met the paramount ruler and said they came from Abuja to investigate a matter of attempted murder on the life of the monarch.
“We saw two masked men in the Hilux van who they claimed were suspects of the attempted murder case, but they did not allow us to go near the vehicles,’’ Assam said.
He said that gunmen came from the creeks in Esit Eket Local Government Area, adding that they ransacked the palace and took away valuables and money.
Reacting to the incident, the Police Public Relation Officer in Akwa Ibom, ASP. Cordelia Nwawe, said the command was yet to receive a report on the kidnap from the Divisional Police Officer in the area.
Nwawe said that the family had also not intimated the command of the incident, but added that the police was committed to safety of lives and property in the area.
Our correspondent reports that this is the second time in two years that unknown gunmen are attacking the palace of the paramount ruler.