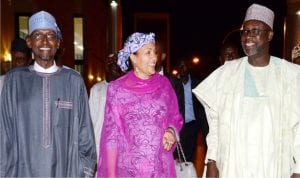 The Independent National Electoral Commission (INEC) has announced the suspension of the outstanding 2015 elections in some five states of the federation till there is guarantee of peace in the affected states.
The states include Kano, Bayelsa, Kogi, Anambra and Rivers.
The commission, in March shortly after the rerun legislative elections in Rivers State, alerted that it would no longer conduct elections in violence-prone states and areas.
A statement at the weekend, signed by its Secretary, Mrs Augusta C. Ogakwu, and made available to The Tide, indicated that the commission would only conduct further elections in those states if it gets a “firm and unequivocal” commitment to violence-free polls by political parties and relevant stakeholders.
The statement said INEC took the decision pursuant to its powers under Section 26 of the Electoral Amendment Act, 2015, and after consultation with the security agencies.
It said, “INEC needs assurance by the security agencies that it is safe to return through the guarantee of peace, order and safety of all election officials, voters, other stakeholders, materials, polling units and facilities to be used for the elections by the security agencies.”
The statement said that the decision followed disruptions of court ordered rerun elections arising out of petitions challenging the conduct of elections in 2015 into various legislative seats in the states.
It stated that INEC had met to consider the options open to it to resolve the impasse in the states.
It stated that the inability of INEC to conclude the elections arose out of violent resistance to the commencement of the polls in Imo North Senatorial district and three state constituencies in the state.
“There was the disruption of polls after commencement (as in Kogi East Senatorial Idah State Constituency), and all senatorial and some House of Representatives and state House of Assembly elections in Rivers State
It added that INEC would enlist the intervention of relevant governmental agencies as well as civil society organisations, religious bodies and traditional institutions, among others.
The efforts are aimed at securing a conducive atmosphere for the peaceful conduct of the elections, the statement added.
Last week, a renowned public affair analyst, Mr. Martins Ikhilea, had raised an alarm that Rivers State may not have representatives in the upper chambers of the National Assembly till after 2019 general elections.
It would be recalled that the Appeal tribunal had last December nullified all three senatorial elections held last year and ordered for a rerun in the state, but unfortunately, some of the rerun elections were cancelled following violence that characterized the process.
Twelve out of 13 seats in the House of Representatives were also nullified while the three Senatorial seats were ordered for a rerun on March 19, 2016. Twenty two state House of Assembly seats were also ordered for rerun.
The March 19 exercise resulted in the presentation of certificates of return to only 12 state House of Assembly and three House of Representatives winners.
With INEC decision, 10 state House of Assembly seats, nine House of Representatives and three Senatorial seats are now pending.