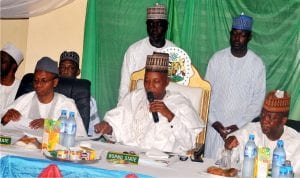 Governor Muhammadu Jibrilla of Adamawa has
approved the appointment of Alhaji Adamu Sanda, the Gangwari Ganye (paramount ruler of Ganye), as 2016 Amirul Hajj.
A statement issued by the state’s Commissioner for Information, Malam Ahmad Sajoh in Yola noted that the five-man Amirul Hajj team has Alhaji Nuhu Bawandu as Deputy Amirul Hajj and Alhaji Musa Ahmad as Secretary.
Sajoh stated that the governor had also approved the reconstitution of the state’s Muslim Pilgrims Welfare Board.
He noted that the reconstitution of Board was occasioned by a new law passed by the state’s House of Assembly assented to by the governor.

A retired forest guard, Mr Olagunju Ajeigbe, has
called on state and local governments to be proactive and take stringent measures to address the indiscriminate felling of trees in the South-Western region.
Ajeigbe made the call in an interview with newsmen in Ikole, Ekiti.
He condemned the activities of some timber contractors in the region, adding that indiscriminate felling of trees would lead to some consequences in the future.
He expressed worry that failure of government to act fast would cause more damages to cash crops such as palm trees, kola-nut and cocoa trees

The Healthwatch Forum, an NGO, has urged
Nigerians to hold government responsible for any failure in service delivery.
A public health consultant and Editor of Nigeria Health Watch, Dr Chikwe Ihekweazu, made the call at the Healthwatch Forum with the theme “Active Citizenship for Health’’ in Abuja.
He noted that health issues were not adequately captured in the political agenda of the government.
Ihekweazu described the forum as a process of making government accountable to its responsibilities, among others.

A Non Governmental Organisation (NGO), Society
For Family Health (SFH), says it will equip 57 primary health care centres in Gombe State.
SFH’s Programm Manager, Mr Abare Galadina,  disclosed this in Gombe at a Thematic Round Table for Stakeholders in the health sector, organised by Inganta Rayuwan Iyali (IRI) project BBC Media Action.
He noted that virtually all the primary health care centres in Gombe were ill equipped, adding that the centres would be equipped between January and August 2016.

A Corps member, Mr Kalu Ndukwe, has
constructed three toilets at his Place of Primary Assignment (PPA) in Gagarawa Local Government Area of Jigawa.
Ndukwe, who is serving at Government Day Junior Secondary School, Gagarawa, said he spent N290,000 to construct the facilities.
He said the gesture was to discourage open defication among students of the school due to inadequate toilet facilities in the area.
The corps member said the initiative would also enhance sanitation and hygiene among the students.

A Kano Magistrates’ Court has sentenced seven
women to three months’ imprisonment for engaging in prostitution and immoral acts.
Binta Musa, 19, Maryam Garba, 19, Zulai Usman, 21, Fatima Tijjani, 20, Sadiya Ibrahim, 18, Maryam Mustafa, 17, and Ali Bashir, 20, were convicted on a two-count charge of prostitution and immoral acts.
The convicts pleaded guilty to the offences.
In his ruling, Chief Magistrate Ibrahim Khaleel sentenced them to three months’ imprisonment with an option of N 10,000 fine for each.

The Christian Association of Nigeria (CAN) has
called on Federal Government to resolve the lingering problem of insecurity, power outage and fuel scarcity and other issues affecting the masses.
A statement signed by the association’s Public Relation Officer in the 19 Northern states and the FCT, Rev. Joseph Hayab, in Kaduna, said that Nigerians were suffering and there was urgent need for government to act.
“The popularity of the present administration in the country is rapidly diminishing due to the prevailing problems of insecurity, power and fuel scarcity.

An Omu-Aran Upper Area Court in Kwara has
granted N1 million bail to three accused charged with theft of N8.8 million cooperative funds.
The accused Sola Adewumi, Modupe Awotayo and Oyeyipo Sunday were also granted two sureties each in like sum.
The accused, however, pleaded not guilty to charges of conspiracy and theft.
The court also ordered them to report daily for one month at the office of the Omu-Aran Unit of the Nigeria Security and Civil Defence Corps.

The United States Ambassador to Nigeria, Mr James
Enwinstle, said  that Nigeria’s National Malaria Elimination Programme annually costs her about N132billion ($660million) annually. Entwistle, who made this known in his message to mark this year’s World Malaria Day, said that despite Nigeria’s current ‘’tremendous progress’’ in malaria elimination, much commitment was still needed.
He spoke on the theme “Ending Malaria in Nigeria for Good’’, in Nigeria, the National Malaria Elimination Programme estimates malaria costs the Nigerian economy about 132 billion naira ($660 million) annually.
Oyo

A housewife, Asiata Lamidi ,  has told a Mapo
Customary Court in Ibadan that she was not the cause of her husband’s ( Muritala Lamidi) impotence.
Asiata told the court that she decided to call-it-quit with Lamidi because he was spreading the rumour around that she was responsible for the dysfunction of his manhood.
“My stay under the same roof with Lamidi as husband and wife will no longer be possible because he has slandered my name.

The Nigeria Security and Civil Defence Corps
(NSCDC), Ondo State Command, has impounded an NNPC branded tanker for diversion of 11,000 litres of Premium Motor Spirit (PMS).
The state Commandant of NSCDC, Mr Adeyinka Ayinla, who briefed newsmen after the incident in Akure, ordered that the product be sold to the public at the official pump price of N86.
Ayinla said that the tanker marked FST 309 XR, was caught by the officers of the command while discharging the 11,000 litres of PMS at Satabest filling station, located along Ijoka road, Akure.
“As at the time the tanker was caught, it had already discharged about 11,000 litres of the product in the filling station.

The Department of Petroleum Resources (DPR)
has distributed 11,200 litres of petrol free to motorists at the Basat Multi Trade Nigeria Ltd filling station in Sokoto.
Our correspondent reports that the filling station, which was sealed for hoarding, was also fined N1 million.
The agency meted out the punitive measures to the independent filling station during an enforcement exercise led by its Sokoto Zonal Operations Controller, Mr Mohammed Makera.
It was observed that each motorist was given 30 litres free, while motorcyclists each received five litres.
Similarly, three other independent filling stations were sealed and fined N 100,000 each per pump for under delivery and selling above the government approved pump price of N 86.50 per litre.

A former All Progressives Congress (APC) 2019 gubernatorial candidate in Yobe State, Dr Aji Kolomi, was among hundreds of members of the ruling party who joined the Peoples Democratic Party (PDP) recently.
He was welcomed into the PDP’s fold alongside hundreds of his supporters at the main opposition party’s secretariat in Damaturu, the state capital.
PDP’s Publicity Secretary in Yobe, Hon. Salihu Mohammed Baba, in a statement, claimed that after the party has kicked off “Operation Flush APC In The State”, it has received over 1,000 APC loyalists into its fold.
He said the new entrants, comprising of men and women, were mostly from Abasha, Layin PS and Malaria areas within the metropolis.
“As the operation continues steadily, we welcome the new entrants into our great party the People’s Democratic Party, (PDP), and urge our teeming youth to answer the clarion call by joining PDP for better Yobe and Nigeria”, he appealed.

Former Head of State, Gen. Abdulsalami Abubakar (retd.), has warned against an increase in fuel price.
Speaking at the 19th Daily Trust Dialogue in Abuja, he said an increase in fuel price will push millions of Nigerians into poverty.
He said this following the recommendation issued by the National Economic Council for fuel price to be pegged at N302 per litre.
The former Head of State said, “Insecurity in the country is worsened by our dear economic situation. Unemployment and underemployment remain at a high level. Over 18 million Nigerians are still caught up in needless poverty. All of these tend to have negative effects on security. In fact, Nigeria now faces a full security crisis that is confounded by the COVID-19 global pandemic and the banditry in many states in Northern Nigeria.
“Most of these have disrupted the final value change across the country and negatively impacted the ability of Nigeria to produce, process, and distribute.
“There is a continuous rise in the prices of food items beyond the reach of many Nigerians. On top of all these, fuel prices are expected to rise significantly in the coming months as announced last November. We all know that when this happens, it will push many millions of Nigerians into poverty.”
On insecurity, Abdulsalami stated that the situation has overstretched the country’s security forces and has led to the death of thousands.
“Ladies and gentlemen, Nigeria is once again at crossroads. Insecurity remains the single, most difficult challenge for the country. The Boko Haram insurgency in the North-East, banditry in the North-West, violence in the South-East, kidnappings and abductions of travellers across many states all continue to fester in the land.
“In addition to these, ethnic, communal and religious conflicts are rearing their head again in many parts of the country. All of these have greatly challenged and overstretched our security forces. This has caused thousands of deaths and millions of internally displaced persons in the country over the past years,” he said.

The Forum of the All Progressives Congress (APC) Party Chairmen in Osun State Local Government Council Areas has cautioned the Minister of Interior, Ogbeni Rauf Aregbesola, to stop henceforth the disturbance of the political peace of the State.
The APC party chairmen who spoke through their chairman, Rufus Awotidoye, on Tuesday, after a meeting in Osogbo, the Osun State capital, stated that the conduct of Aregbesola constituted an obvious distraction to the administration of Governor Gboyega Oyetola.
Awotidoye disclosed that the Interior Minister’s affirmation in Ilesa last Friday “of being the brain behind the obnoxious, leprous and antagonistic pressure group within the state APC self-styled, The Osun Progressives (TOP), was unfortunate and needless.”
They praised the quick and prompt condemnation by the State chairman of the Party, Prince Gboyega Famodun, of the needless outburst of Aregbesola, stating that they were in agreement with the chairman’s timely response.
The local APC party chairmen, however, charged the governor to invoke his vast constitutional powers to deal with whoever is constituting a clog to the lawful performance of his official duties.
They warned Aregbesola to stop taking advantage of the gentle nature of the governor to foment trouble and crisis in Osun State each time he visits the State.
They reminded the Interior Minister that his ministerial appointment should be a source of blessing to the people of the State and not the other way round.
The local APC chairmen, who cautioned Aregbesola to desist from distracting Governor Oyetola from performing his statutory duties, accused him of being responsible for all the atrocities being performed against the sitting Governor and his government by the leadership of his militant political group in the state.
They asked the Interior Minister why he has chosen to be the tormentor-in-chief of Governor Oyetola when it’s on record that the governor as his Chief of Staff gave him a hundred per cent support for the eight solid years he ran the administration of the State.
The furious APC local chairmen told Aregbesola that “enough is enough, you should stop riding roughshod on the State as if Osun is a conquered territory of yours.
“There were functional politicians in the state before your foray into the political terrain of the state.
“You should stop playing God who possesses the absolute power to install governors in the State, as all powers belong to God Almighty.
“When it’s apparent that you could not allow any kind of such seditious act against your administration when you were in government, one wonders why you are doing the same to the focused administration of Governor Oyetola.”