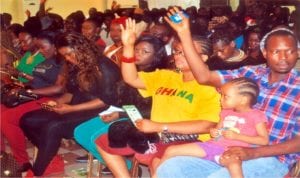 Guests at a social function in PH

Rivers State is very rich in
tourist attraction. With its long expanse s of beautiful coastal sandy beaches stretching from Opobo through Brass to Koluama, numerous long and winding creeks, streams and rivers as well as forests with their associated shrines and wildlife, the tourism potential of Rivers State is yet to be fully tapped, as a major theatre in the slavetraffic and palm oil trade of the mid nineteenth and early twentieth centuries is endowed with war relics, artifacts and historical monuments.
Today, the state occupies an enviable position as the centre of oil and gas operations in the country and the home of several other modern industrial establishments. Rivers State culture is rich in festivals, ceremonies, dances, music and crafts, and these are varied and diverse as the people whose hospitality has become legendary. The rich culture of the state which is rooted in its unique environment of lakes, creeks, rivers, forests and swamps, provides the centre point of its tourism development.
Since the establishment of the tourism and hotels corporation in 1970, the Rivers State Government has embarked upon several tourism projects. Notable among these are the Isaka Holiday Resort on a twenty three hectare Island about one nautical mile from Port Harcourt, the zoo in Trans Amadi and the Isaac Boro Lesure Park along Aba road in Port Harcourt. Other projects include the renovation of the Jubilee Park in the old township and the establishment of a museum in the Secretariat Complex. These projects have been developed as a social service with the aim of providing facilities for sightseeing and recreation for residents of the state and those visiting.
Port Harcourt, the capital city is certainly one of the most bubbling cities in Nigeria. Although a major industrial centre, it is affluent with history and boasts of a large number of tourist attractions. The city also referred to as Garden City, has a lot to offer and is definitely the right place to visit if you have a taste for the good things of life. With a myriad recreational and fun-spots which have turned the city into tourists first port of call and home away from home.
A trip to the happening city is incomplete without a taste of the local cuisine known as Bole and Fish. A significant meal of the Rivers people, it is made from a recipe of roasted plantain and fish slathered in the most delectable peppery, palm oil sauce. The thing about Bole and Fish is that it is best purchased on a street corner where indigenous Port Harcourt women prepare the meals on red hot coals. And as with all street food, it is best to be sure that it is freshly made and piping hot when you buy it. D/Line, a Street in Port Harcourt, is fondly referred to as ‘Bole headquarters’ as it harbours a large number of sellers. If you however do not fancy the idea of buying food off the streets casually in a black nylon bag, you can go to or place an order from the Bole king a fairly new restaurant launched to cater to the ‘Bole needs’ of the city.
Port Harcourt cultural center is a famous tourist attraction located on Bonny Street, it serves as a centre for exhibiting the cultural diversity of Port Harcourt and Rivers State as a whole. The centre exhibits artifacts that tell the history of the city, and houses shops that sell copies of these local artifacts as well as African jewelry, home wares, pottery and souvenirs within the center. Again with a theater a stage and auditorium for live performance of cultural dance and play, it holds a huge attraction for visitors. You can also take time out to see a play at the cultural centre and have fun, learning new things about the city’s rich culture.
Port Harcourt tourist beach is a tourist destination in the city located at Kolabi creek east of the old township, Port Harcourt Tourist Beach is arguably the most popular beach in Port Harcourt. A clean sandy beach, it is perfect for a walk by the seaside while enjoying the cool breeze. You can also sunbathe and enjoy a dip in the cool water. Many activities are available for visitors looking for sport.