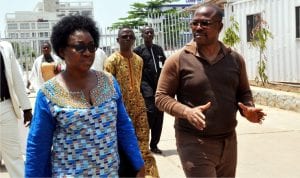 The Director-General of the Nigerian Institute of International Affairs (NIIA), Prof. Bola Akinterinwa, has said that enhanced relations between Nigeria and China would “compel” manufacturing in Nigeria.
Akinterinwa said this on the side line of China-Africa Conference organised by a magazine in Abuja on Wednesday.
He added that this would enable stakeholders in the manufacturing sector to meet up with the demands of the growing relationship between both countries.
“The most important gain is that the relationship with China will compel Nigerian manufacturers, policy makers to sit-tight, rethink, work harder and live up to expectations.
“This is particularly with the challenges thrown by and in the various agreements signed in Beijing.
“President Muhammadu Buhari did commit himself and the people of Nigeria by saying he will ensure we respect all obligations in previous agreements reached with his predecessors.
“For instance, under the Jonathan administration, the then President Goodluck Jonathan signed an agreement for a railway project covering Lagos to Calabar.
“The understanding was that the Chinese will provide 85 per cent of the funding while 15 per cent will be covered by the government of Nigeria.
“The Chinese respected their own side but the Nigerian side did not keep to the spirit and the letters of the agreement, so there was a problem.
“Now, when President Buhari says he will revisit the agreements and respect all the obligations, it now means that Nigeria is prepared to find the 15 per cent missing.”
He said that the move by the present administration would make Nigeria “a country to reckon with on the basis of sanctity of agreements”.
Akinterinwa further explained that enhanced relations with China would bring about more advantages.
“These are advantages you cannot begin to quantify and perhaps more significantly we are talking about world gains.’’
Akinterinwa further explained that the determination by the present administration to revisit existing agreements with China and build on new ones placed China as an important aspect of Nigeria’s foreign policy.
“The most important implication of Nigeria’s relationship with China is that of our foreign policy.
“Until now, we have been talking about four concentric circles as initially articulated by Prof Ibrahim Gambari.
“China, which currently is in the outermost concentric circle with all other countries of the world, has now been singled out either as the most important partner or will now be in the fourth outer circle while all countries will be in the fifth outermost circle.
“The implication is that China will continue to warrant more focused attention,” he said.
He added that the people-to-people relations would define the direction of relations between both countries in the future.

Contribution Of Solid Minerals To GDP Too Low – Minister