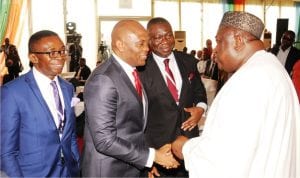 The Vice-Chancellor,
Rhema University, Aba, Abia State, Prof. Ogbonnaya Onwudike, has called on the Federal Government to extend the Tertiary Education Trust (TET Fund) grants to private universities.
Onwudike, who made the appeal in his address at the maiden convocation of Rhema University in Aba, said such intervention would help in manpower development in private universities.
“Education Trust Fund was set up by the Federal Government to assist the development of the Nigerian Higher Education System.
“At present only government-owned universities benefit from the fund, while the private universities are excluded even though private universities also produce relevant manpower for the development of the country.
“The desired transformation of the education sector as envisaged by the setting up of the TETFUND may not be achieved after all if the private universities are left out of benefiting from the fund,” he said.
The VC argued that private universities, like their public counterparts, were not established to make profit but for the purpose of developing the society.
He said that funding remained a major problem to private universities, noting that they required government assistance to grow.
Onwudike said that the university was graduating a total of 44 students from two batches-the 2013 / 2014 class and 2014/2015 class.
He said that three students had first class honours while 21, 19 and one had second class upper division, second class lower division and third class respectively.
The Executive Secretary, National Universities Commission (NUC) Prof. Julius Okojie, congratulated Rhema for surpassing older private universities within the short period of its establishment in having eight fully accredited courses out of nine.
He said that NUC was happy to know that although Rhema was a conventional Christian university situated in the heart of Igbo land, it did not discriminate in its admission processes.
Speaking, the Abia State Governor, Dr Okezie Ikpeazu, thanked Mr Emma Okorie, the founder of Rhema for birthing the dream of building a university for the benefit of mankind.
Ikpeazu, who was represented by the Secretary to the State Government, Dr Eme Okoro, promised to continue to partner with the university in its quest to train men and women of noble character.
In her valedictory speech, the best graduating student for the 2013/2014, Miss Rabiyat Usman, said it was an honour to be taken as a pioneer student of the university.
On behalf of her colleagues, she promised to be the change agent that their alma mater expected of them and to be worthy ambassadors of the institution.
Okorie was later installed the first Chancellor of Rhema University and awarded an honorary Doctor of Social Sciences degree (DSc).