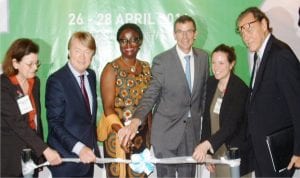 Minister of Solid Mineral Development, Dr Kayode Fayemi, yesterday has said that the contribution of solid minerals to Gross Domestic Product (GDP) is low.
Declaring open a seminar on “The Role of Mining Sector in Diversifying the Revenue Base of the Nigerian Economy,” Fayemi described the situation as unacceptable.
The minister noted that in spite of the recognisable size of solid minerals in every local government in Nigeria, its contribution to GDP was too low.
The one day seminar was organised by the non-oil monitoring committee of the Revenue Mobilisation, Allocation and Fiscal Commission (RMAFC).
Fayemi, who was represented by the Minister of State, Mr Abubakar Bwari, said the contribution of the sector to GDP was as low as 0.34 per cent.
He said Nigeria had enough resources to make it one of the richest countries in the world but was rated among countries with the highest number of poor people.
Fayemi said that the present administration was determined to change that by ensuring that the solid minerals sector rivals the oil sector.
“In order to do that however, we must formalise the activities of our artisanal miners, repair moribund infrastructure and provide more respectable geosciences data.”
He said there was the need to also engage with foreign and domestic partners and work off an integrated roadmap that would emerge from a broad consultation process.
Fayemi also said that the Federal Government was focusing attention on agriculture because Nigeria was spending more than N1.5 trillion annually to import food, a situation that has put a heavy pressure on the nation’s foreign exchange.
He commended the RMAFC for showing great concern for wealth generation as part of its constitutional responsibility of monitoring revenue accruals into the Federation Account.
He said that its recommendation to upgrade the mines and inspectorate department of the Ministry into an agency was being adopted.
The department is responsible for exploitation and exploration activities as well as collection of operational fees.
Acting Chairman of the commission, Mr Shettima Abba-Gana, in an address said that the commission’s efforts geared towards generating revenue from the sector enabled it to contribute N12 billion into the federation account in 2015.
From this, he said 13 per cent derivation was paid to the states where the solid minerals were gotten from for the first time.
He, however, said that the key problems bedevilling the sector were “dominance of the mining sector by foreign companies, especially the Chinese companies and illegal mining activities by artisanal and small miners all over the country, resulting in environmental devastation and loss of revenue to government.”
Mr Ajibola Fagboyegun, a federal commissioner at the RMAFC told newsmen that the factors hindering mining exploration were being looked into.
“A situation where an individual will have title license covering very large area of land but will not be seen and the prospective investors will find it difficult to come in and work is now being redressed.
“Soon the atmosphere will be conducive for mining business with friendly policy that will encourage investors to come in.
“We are sure many people want to make money and Nigeria is a very good environment for investors to make their money,” he said.
The seminar was geared towards developing new initiatives on how to diversify the economy from crude oil to solid minerals to boost revenue.