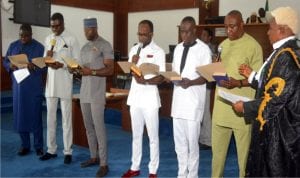 In a bid to empower small and medium scale business owners in the state, Rivers State Governor, Chief Nyesom Wike has approved the disbursement of business loans to 35,000 less privileged business operators under the Central Bank of Nigeria’s N2billion Micro, Small and Medium Enterprises Development Fund.
A statement signed by the Special Assistant to the Governor, Electronic Media, Simeon Nwakaudu, indicated that under the first phase, Governor Wike approved a list of 35,000 from the 23 local government areas of the state.
The statement explained that amongst the beneficiaries are indigenes and non-indigenes resident in Rivers State.
The list of beneficiary small and medium scale business owners included: barbers, plantain sellers, restaurant owners, painters, tailors, hairdressers, traders, market women, mechanics, fishermen, farmers etc.
These are the ordinary folks committed to developing themselves with the support of the government, the statement pointed out.
The empowerment loans approved by the governor, according to the statement, are being distributed by the Rivers State Micro Finance Agency (RIMA).
The statement emphasised that the beneficiaries got their loans through Cosmopolitan Microfinance Bank: #9 Agudama Street, D/line Port Harcourt, for the people of Opobo/Nkoro, Oyigbo, Andoni, Asari-Toru, Bonny, Degema, Eleme, Gokana, all traders, market women and all non-indigenes.
It further disclosed that other beneficiaries from Obio/Akpor, PHALGA, Khana, Okrika and Omuma got their loans through the RIMA Growth Pathway Microfinance Bank, located at Rivers State Secretariat Complex, Podium Block, Port Harcourt.
Also, Premium Microfinance Bank of Plot 202, Olu Obasanjo Road, Port Harcourt disbursed the loans to the people of Abua/Odual, Ahoada East, Ahoada West, Emohua, Ogu/Bolo, Etche, Ogba/Egbema/Ndoni, Akuku-Toru, Tai and Ikwerre.
It further explained that the injection of the N2billion into the businesses of the less privileged in the state has kick-started the expansion of many of these businesses.
The multiplier effect is already being felt by the people in the lower rung of the economic ladder, the statement stated, adding that the empowerment programme has led to employment opportunities as several beneficiaries have expanded their businesses.
It would be recalled that prior to the disbursement of the loans, the government had organised a training session for all the beneficiaries on how to effectively use the loans to improve on their respective businesses.