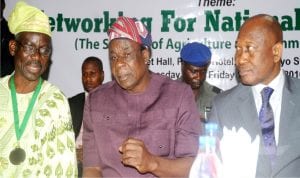 As part of measures to check academic corruption and examination malpractices, otherwise called ‘sorting”, Rivers State Governor, Chief Nyesom Wike, has enjoined alumni associations in the country to take the campaign against the menace to the State and National Assemblies for legislation.
Wike said the incidence of sorting in higher institutions of learning has become worrisome to the educational advancement of the nation, warning that steps were needed to be taken to curb the social malaise prevalent in state, federal and private universities in the country.
The governor stated this at the weekend, when the University of Nigeria Alumni Association (UNAA) honoured him with a Distinguished Leadership Award, at the 91st National Executive Council (NEC) meeting of the body in Port Harcourt.
Wike, who was represented by his Deputy, Dr Ipalibo Harry Banigo, said a situation where students influence lecturers to allocate scores for a specific amount, when they fail the particular course, cannot enhance the quality of education.
He regretted that the scenario has lured some male lecturers to request female students to sort with their bodies, thereby increasing the many cases of sexual harassment and abuses on women in the university system.
The state chief executive lauded UNN Alumni Association for its immense contribution to the growth and development of Rivers State, particularly for producing the former governor of the state, Dr Peter Odili, his wife, Justice Mary Odili, former deputy governor, Sir Gabriel Toby, and Hon Justice Iche Ndu (rtd), among others, that served the state in various capacities.
Wike thanked the association for the choice of Port Harcourt for the 91st NEC meeting, as their presence will go a long way to counter the senseless war of calumny against the state, and prove that Rivers State is indeed safe and hospitable.
Earlier, Chairman of the occasion, Hon Tamunosisi Gogo-Jaja, had thanked the Local Organizing Committee on the choice of the theme: ”Sorting: A Dead End for Standards in Tertiary Institutions”, adding that the problem, if not properly handled, could lead to the destruction of future generations.
In his address, National President of University of Nigeria Alumni Association (UNAA), Chief Andrew Oru, said the association will ensure that the university harnesses available opportunities, and commended the efforts of the current vice chancellor in re-creating the high standards of the university.
Also speaking, the President, UNAA, Port Harcourt branch, Mrs. Tonia Nzekwe, said the branch was working towards developing the second phase of the Alumni Ultra-Modern Centre in Port Harcourt, which will in turn, reduce the suffering of members in the South-South region.