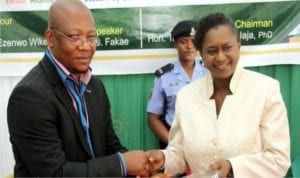 Rivers State Governor, Chief Nyesom Wike, represented by his Deputy, Dr. (Mrs) Ipalibo Harry Banigo (right), receiving an Award of Excellence from Hon. Tamunosisi Gogo-Jaja on behalf of the National Executive Council (NEC) of the University of Nigeria Alumni Association (UNAA), during its NEC meeting in Port Harcourt, at the weekend.