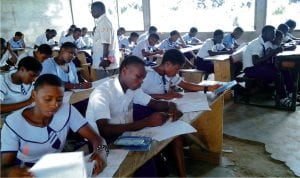 The Rivers State
Government has assured that it would ensure the accreditation of all the programmes in the state-owned College of Health Science and Technology (RSCHST).
Commissioner for Health, Dr. Theophilus Odagme, gave the assurance midweek, during a Town Hall meeting with staff and Students of the college.
“Government will be more involved in this college now and will ensure that all your programmes are accredited”, the commissioner said.
The commissioner, who was responding to call by the school authority to enhance the accreditation of programmes in the school, also stated that the government would ensure that students learn in a more comfortable environment.
Towards this end, he said the issue of flooding in the campus will be addressed, noting that his ministry was already working with the ministry of urban development for the purpose.
Dr Odagme used the opportunity to advise the students to shun cultism and other social vices, urging them to take their studies seriously. He stated that as students they constitute a very important part of the health care delivery system of the current administration.
The commissioner further promised the students in his quest to better their lot, to discuss with the primary health care management board on ways of engaging them after graduation, in accordance with what was in the past.
Earlier in his welcome address, the Acting Provost of the College, Dr Nnamdi Amadi, had noted that but for three programmes of the college which have National Board for Technical Education (NBTE) accreditation, all others have only professional accreditations.
According to him, fund was a major challenge of the institution, noting that since the college is a monotechnic, they do not have access to any intervention funds for tertiary institutions.
This, he said, has “made us depend on subvention from government and Internally Generated Revenue (IGR), which is mostly from fees from students”.
Also speaking, the student’s Union Government  President, Comrade Benard Barigbue, said water supply, lack of hostels, flooding of the campus, and poor electricity supply on campus are major challenges to the students.
Highlights of the visit was the tour of various schools of the college and town hall meetings with the students and management separately.
The commissioner was accompanied by the Permanent Secretary of the ministry, Mrs Caroline Wali and Primary Health Care Management Board counterpart, Dr Agiriye Agba Harry, as well as the Director of Administration, Mr Boma Wakama.