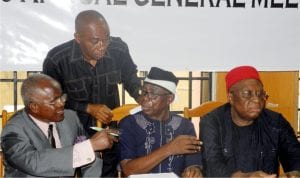 The Nigeria National Petro
leum Corporation (NNPC) has said  that it spends $1.8 billion in 90 days to import fuel.
The Group Executive Director Upstream of NNPC, Mr Bello Rabiu, stated this while addressing State House Correspondents, on Thursday.
According to him, the organisation spends between $16 million and $20 million on imports daily totaling about $1.8 billion per quarter.
Rabiu was reacting to the inability of the nation’s refineries to provide the local needs of consumers. He said that the organization had to rely on importation to satisfy local consumption.
He said that import bill depended on both volume and the price adding that a cargo of product, about 40 million litres, as at today costs about $13 million to $14 million dollars.
He said that the country produced about 2.2 million barrels of crude per day but only about one million belonged to NNPC through 60 per cent equity in the Joint Venture.
“The average equity crude for sale is not up to one million barrels which means that the total amount of money we can get is about $40 million dollars’’, he said.
According to him, if half of the amount is used to import products, it leaves a lot of implications for the economy.
He said that the organisation also spent money to produce which reduced the accruals. “We spend about $30 million to produce.
“We try to maximise what is available’’ he said, adding that over 90 per cent of other imports were financed by the oil sector.
“That is why we said we need to diversify, export more and import less’’, he noted.
He said that more countries now produced oil and that some producers that came out of crisis such as Libya had joined in the crude market.
He said it was unfortunate that most of the oil producing countries were import- dependent.
He said that for the local refineries the nation could not get more than 15 million to 20 million litres of PMS out of them but could produce enough kerosene (DPK) and diesel (AGO) if they operated at 90 percent installation.
The Group Executive Director, Refinery, Mr Anibor Kragha, said the operators were focused on increasing fuel supply to markets outside Lagos and Abuja.
On the pipelines, he said most of them were on pressure testing to ensure safety before pumping through them.
He said that the Enugu depot would take some time to be revived but added that Aba depot was ready to service the entire East.

…Allocates 1,500 Trucks Of Petrol To Marketers