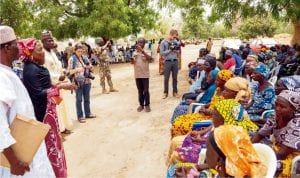 The Chief Executive Officer of Murtala Muhammed Foundation (mmf), Mrs Aisha Muhammed-Oyebode (2nd left), addressing some of the parents of abducted Chibok Girls at a meeting with them in Chibok Borno State on
Monday.

Exactly two years ago,
April 14, 2014 to be precise, Nigerians were greeted with yet another news of terror.  This time, mass abduction of secondary school girls from a government school in Chibok town, Nigeria.
The news of the abduction of close to 300 girls from just one school could not have been considered real in a hurry even though it turned out to be real. Hopes were high that such number of children could not just be whisked away without concrete effort from the government to track down the abductors, rescue the abductees and probably bring the abductors to book.
With efforts credited to the past administration of former President Goodluck Jonathan, to have been made to ensure the return of the girls, it is quite surprising that today, the world could still be marking April 14 without these girls.
To say that a matter that attracted the world’s attention, the United States of America, France and even the Soviet Union not excluding Israel is such that is today still shrawded in mystery is highly incredulous.
Apart from some notable international concerns, among which was the visit of Malala Yousatzai, an international advocate for girls right to education in July 2014, in which she charged former President Goodluck to “bring back our girls.” a group headed by a former Minister of Education, Dr Oby Ezekwesili, kept the candle for the search of the where about of these girls on, as they stood still at the Eagle Square, Lagos, Nigeria, day and night reminding Nigerian leaders of the need to place great premium on the search for the girls.
Although varying interpretations may have been adduced to the resilience of the “Bring Back Our Girls” group at insisting that nothing else took the precedence of the country’s governance than a genuine search for the abducted girls, it is on record that their daily, unrelenting assembly was remarkable in not only keeping the government on its toes as regarding the need to rescue the abducted children and quiz out their abductors, but provided rallying platform for the Christians and Muslims to unite for once and pray.
All the same, if the effort of the past president who could neither speak the tongue of the terrorists nor share in their worship could not salvage the situation, there was high hope in the present leadership, headed by President Muhammadu Buhari, with all the cultural and religious advantages he had over the former to deliver, a major reason for which many gave him their mandate.
Unfortunately, close to one year into the new administration of Nigeria, the realisation of the dream of bringing back our girls seems to remain a far-cry even though in December, 2015, President Buhari informed Nigerians that Boko Haram had ‘technically’ been defeated, whatever that may mean.
It must be clearly stated that apart from the trauma of being forcefully separated from the children on the part of the parents and from the family, on the part of the children, we cannot fight the rising spate of female bombers as long as these girls remain in the custody of their abductors, as they have devised a tactics of turning kidnapped girls into suicide fighters. “More than hundred women and girls have been used in suicide bombing orchestrated by Boko Haam since the summer of 2014,” the Long War Journal reports.

Our Communities Should Empower Women – Manjor

The Essential A Of Beauty Therapy