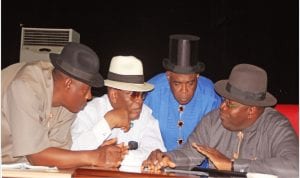 A Port Harcourt High Court in Rivers State presided over by Justice George Omereji, has resolved to consolidate hearing on all applications brought by parties involved in the suit filed by Peoples Democratic Party (PDP) in the state seeking a committal to prison against the Minister of Transportation, Chibuike Amaechi, Chief of Defence Staff and others for disobeying Court order which barred the use of soldiers during the last re-run elections in the state.
Other respondents in the matter include the Chief Defence Staff, and the Commander, 2 Brigade Nigerian Army, Port Harcourt.
Omereji took the position following a motion of objection raised by the Counsel to the Chief of Army Staff and the 2 Brigade Commander, Port Harcourt, Barr. Patrick Agada while responding to the two applications brought by Counsel to the PDP and its State Chairman, Bro Felix Obuah before the court during the resumption of the matter, yesterday in Port Harcourt.
The trial judge stated that it was fundamental in law that all parties be served, adding that it would be unfair if the parties involved were not heard, and the court went ahead to hear the applications as canvassed by the applicant.
The Judge, therefore, adjourned the matter to the 10th of May, 2016 to avoid any party complaining of improper service, and directed that all the parties be served as the applications would be taken simultaneously on the adjourned date.
Counsel representing the Chief of Army Staff and the Brigade Commander, Patrick Agada told the court that he was not served with the application filed by the applicant’s lawyer, Barr. Kingsely Chukwu, and urged the court to ensure that the proper procedure was followed.
The Independent National Electoral Commission (INEC) was represented by, Wilfred Nwabude (Esq.) , while, the Minister of Transport, Chibuike Rotimi Amaechi and the Chief of Defence staff, who are first and second respondents in the matter, were not represented by any Counsel during yesterday’s sitting.
It would be recalled that the Peoples Democratic Party (PDP) State Chapter, through its Chairman, Felix Obuah, had approached the court for an order restraining the use of soldiers during the said elections, which all the respondents, refused to comply with.

Rumbles Over 2016 Budget …What Federal Executive Didn’t Do