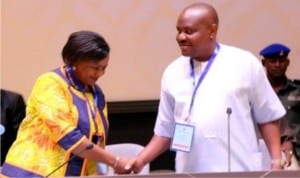 Following allegations that the police shot and killed one student during the protest at the University of Port Harcourt over increase in school fees last Monday, the Trade Union Congress (TUC) in Rivers State has given the Nigerian police 14 days ultimatum to produce the killer of the student or face withdrawal of the services of all TUC members and affiliate unions in Rivers State.
Chairman of TUC in the state, Chika Onuegbu, who gave the ultimatum in an interview in Port Harcourt, the Rivers State capital, yesterday, explained that it was unacceptable that the Nigeria Police will use live bullets on unarmed protesting students.
Also speaking, a human rights lawyer, Ken Atsuwete, said it was a shame that police in Nigeria have not learnt how to quell a peaceful protest without the use of firearms or violence.
Atsuwete also said the management of University of Port Harcourt should be held responsible for the death of the student.
Meanwhile, the Rivers State police command has denied that its men killed any student during the protest.
The Command Public Relations Officer, Ahmad Muhammad, told our correspondent that no student was killed during the protest, adding that officers of the command detailed to quell the crisis only acted within the ambit of the law and their mandate.
Corroborating police position, Deputy Registrar (Information), University of Port Harcourt, Dr Williams Wodi, denied that any student died as a result of the protest.
Wodi said that “the Senate of the institution has shut down the university with immediate effect.”
In an SMS sent to The Tide, Wodi said: “All students have been directed to vacate their hostel accommodation before 6pm today (Monday),” adding that the Student Union Government and “all their affiliate bodies have been suspended with immediate effect. The closure will last for one month”.
Wodi stated that the students were asked to pay the sum of N45,000 only as fees, which was the reason for the protest.
He noted that the closure of the school would translate to a shift in the academic calendar as the students were before the protest preparing for their third semester examinations.
However, some of the students, who spoke with The Tide, complained that the school authorities mismanaged the impasse over fee hike.
The students alleged that other Federal Government-owned universities such as University of Lagos, University of Calabar, University of Benin, University of Ibadan and Obafemi Awolowo University, pay N17,500; N25,000; N12, 000; N21,500; and N19,700, respectively, wondering why the University of Port Harcourt should charge N45,000 tuition fees from students.
The Tide gathered that the students took to the streets, destroying university properties, including vehicles, in protest against the Senate’s refusal to reverse the increase in school fees.
The protest had turned violent after some anxious security agents detailed to quell the unrest, allegedly shot live bullets at some students.
Some students, who spoke with The Tide alleged that the police shot and killed one Peter Ofurum, a final year student, and president of the Faculty of Management Sciences, adding that two other students sustained gun-shot injuries from the police.