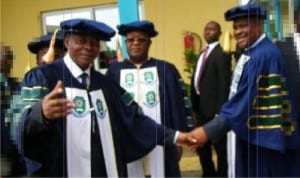 A University Don. Pro
fessor Willie J. Okowa, has said that the Rivers State University of Science and Technology (RSUST) is well placed to contribute to the development of post-oil Rivers State.
Okowa, who gave this hint, last Thursday  at the 28th Convocation lecture of the RSUST, explained that all that was required was the will and necessary encouragement to do it.
In his lecture titled, “Science and Technology in the post-oil Development of Rivers State: The place of RSUST”, the Professor of Economics identified four key means through which the University could contribute to the economy of the State without dependence on oil.
“it is my position that the successful diversification of our state’s economy will start with a successful transformation/modernization of our agricultural sector”, he said.
While faulting the under-utilized potentials of the state in agriculture, he stated that despite programmes in Agricultural Education, Animal Science, Soil Science and Fisheries, “agriculture in the state is still largely dominated by traditional farmers and fishermen”.
He stated that a successful transition to a post-oil economy for the state will, therefore, “depend largely on developments in our agricultural and agro-allied industrial sectors.
“Rivers State UST has the critical catalytic role to play here, in line with its teaching and Community Service commitment/mandate”, he said.
The second thing for the University to do, he continued, is to develop thousands of skilled labour in such fields as Electrical, Works, Masonry Welding, Plumbing, Carpentry and various aspects of road construction.
This, according to him,, could be done through the institution’s Technical Education Department.
All of the fore-going would make less meaning if the University’s academic programmes are not overhauled. This, he explained, should be done in a way that “our mechanical engineers at graduation should be able to dismantle any car engine, for example, and couple it back”.
He also called for the employment of practical technicians as instructors and demonstrators, rather than the present situation of employing people with what he called “big certificates”.
In his closing remarks, Chairman of the occasion, Professor Joseph Ajienka advocated for a paradigm change of university lecturers not contributing to sustainable development of their institutions.
“As Universities, we have a role to play to develop indigenous technology to a level that it can serve society. To do this, our prayer is for Universities to be in the fore front in this (proposed) knowledge society, to transform society. This is the whole essence of life after oil”, he said.
Earlier in his welcome address, Vice Chancellor of the University, Professor Blessing Didia had eulogized staff of the institution for their cooperation so far, which, he said, had made things easier for the administration of the University.