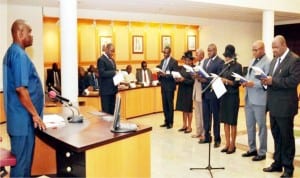 The Rivers State Governor, Chief Nyesom Wike, has advised former governor of the state and Transportation Minister, Chibuike Rotimi Amaechi, to accept the reality that his political party lost the rerun elections and allow the state government focus on the rebuilding of the state.
Wike said that the responsibility of reviving the state after the immediate past administration failed to use the N3trillion that accrued to the state under its watch was enormous.
Declaring open a retreat on strengthening capacity, efficiency and service delivery for sustainable development for top government officials at Onne Multi-Purpose Centre, yesterday, Wike said that the administration has deployed resources and expertise to correct the failures of the former administration.
He said: “I call on the former governor and leader of the APC in the state to accept the reality that the re-run elections has woefully been lost by his party, and that Rivers people have, again, overwhelmingly re-affirmed their confidence, trust and preference for the PDP.
“Therefore, spare us the agony of unnecessary hostility and allow Rivers State to move forward in peace and security. We expect you to use your high office and connections to attract meaningful development projects to the state as I did during my time; not senseless and unpatriotic distractions. Enough is enough.
“All of us are aware of the sorry state of things in Rivers State before May 29, 2015. Between October 25, 2007, and May 28, 2015, over N3trillion accrued from all revenue sources to the state. Yet, they did nothing tangible with that money to develop the state. Instead, they squandered and diverted most of this money into private pockets through bogus and ill-fated projects,” Wike pointed out.
The governor noted that all key projects initiated by the former administration were either abandoned or not executed at all.
He said: “Let’s briefly look at the records since they live in denial. The visible projects initiated by former Governor Amaechi during his eight years in office include: the Karibi Whyte Mega Hospital project, the Greater Port Harcourt City Project, the new Rivers State University of Science and Technology project; the Rivers State Sustainable Development Agency overseas scholarship scheme; the mosquitos eradication scheme, the Adokiye Amiesimaka Stadium project, the 500 primary schools project, the 23 mega secondary schools project, the ill-fated less than 1.5kms monorail project, and the dualization of some inner city roads.
“However, none of these projects was realised before they left office despite spending billions and billions of naira on them. For example, the Karibi Whyte Hospital was not just abandoned at the foundation stage, it turned out to be a big scam on Rivers people. The Greater Port Harcourt project existed mainly on paper without any tangible progress. The Adokiye Amiesimaka Stadium was abandoned half-completed, while not even a stone was laid for the proposed new Rivers State University.
“Furthermore, the mosquito eradication project was another huge scam, just as the secondary school and overseas scholarship scheme were misconceived, fraudulent and unsustainable. In addition, they sold off three of the state’s four independent power plants initiated by the Governor Peter Odili administration to cronies and diverted the proceeds to private ends.
“The narrative is not different in their much-flaunted education and health projects. Their own project audit before they left office reveals that out of 498 primary schools they initiated, only 116 were completed, and the rest abandoned.
“Similarly, out of the 23-mega secondary schools they initiated, only one was completed, the rest abandoned. Throughout the eight years, no public secondary school was rehabilitated, while all the general hospitals were wilfully abandoned to rot and decay. I challenge the former governor to controvert these facts in a public debate,” the governor emphasised.
He said despite inheriting a badly governed state, his administration hit the ground running, initiating critical projects and programmes that have revived the economy of the state to the benefit of the people.
The governor said: “I made it clear from our first day in office that we didn’t run for the office of governor for the fun of it. We ran to restore hope to our people; provide first-class public infrastructure, tackle insecurity and make Rivers State a preferred destination for local and foreign entrepreneurs.
“We promised to build a new Rivers State where our people will be secure in a well-managed government that cares about how we serve our people; secure in a justice system that protects the rule of law and delivers equitable justice; secure in a prospering economy that works for everyone; a Rivers State where our children have equal access to first-rate education regardless of background; a Rivers State that is secure in a healthcare system that is accessible, qualitative and affordable for everyone.”
He pledged that his administration will continue to work for the benefit of the people translating the New Rivers Vision into reality within the specified time.
The governor noted that his administration will sustain sound development principles and the pro-people accountable application of resources to enhance the development of the state.
He said: “Let me re-affirm the determination of our government to make Rivers State secure, peaceful and prosperous through public and private sector participation. Although the glorious fruits of the transformative process we have started would take some time to fully manifest, there is no doubt that we are making steady progress with the lean resources at our disposal, despite the disruptive distractions from the bizarre opposition that has taken partisan politics to the point of terror.”
In his opening remarks, Secretary to the Rivers State Government, Chief Kenneth Kobani, stated that the retreat was organised to equip top government officials with knowledge to assist the governor achieve his development goals.
The retreat had as resource persons, Prof Ibrahim Gambari, Prof A.O. Afolabi, Prof Bob Osaze, Ambassador S.M. Taribo, Dr Ita Ekpeyong, Mr Emeka Ezeh, Ambassador John Gana, Prof Christiana Okoji, Dr Egem Odey, and Ferdinand Agu .
The governor, his Deputy, Dr Ipalibo Harry Banigo, commissioners, special advisers, special assistants, permanent secretaries, members of boards and commissions are participants at the retreat.